Skip to content
Loading...
How A Small School In Rural Zambia Will Finally Get Electricity
7 Water And Energy Conservation Strategies For Large Families
How 200 Solar Lights Found Their Way To A Small School In Rural Zambia
Ørsted Consolidates Customer Solutions & Bioenergy Divisions
India’s NTPC Limited Offers Solar Power Project Management Services To ISA Members
5 Tips to Make Your First Bike Commute to the Office a Successful One
Congress Charges Ahead on Energy Storage: (BEST) Act
First Round of 15 Winners of Reinventing Cities Competition Announced, Creating New Beacons of Sustainable Design & Construction
5 Major UK Businesses Powered by Renewable Energy
Buy An Electric Car And Save The Planet! Not So Fast, Consider The Alternatives First
Why Do Republicans Now Hate On Christian Morals, National Security, Democracy, The US Constitution, The Rule Of Law, The FBI, The CIA, Honesty, & The US Deficit?
Don The Con & Crew Creating Alternative Reality That Is Almost Completely Fake
Nasty Gas Smells In Long Beach Launch AQMD Long-Term Investigation — We’re There, And It’s About Time!
ActivismClimate ChangeGlobal Warming 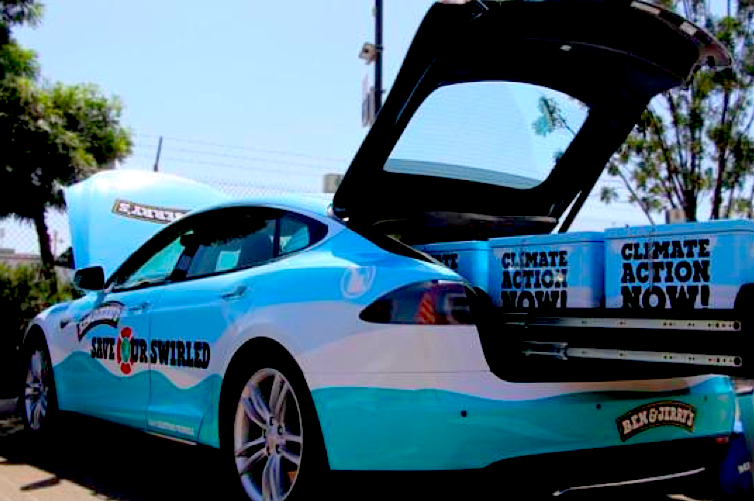 You will find the latest climate petition in an unlikely place—Ben & Jerry’s stores and scoop shops across the United States. The Vermont-based company just unveiled Save Our Swirled, a new ice cream flavor inspired by the company’s campaign to raise awareness about the facts and issues of worldwide climate change.

“On every carton of the flavor—raspberry ice cream streaked with marshmallow and raspberry swirls and chunks of dark and white fudge ice cream cone—is a link to sign a petition calling on world leaders to work toward 100% clean energy by 2050, beginning at the United Nations climate summit in Paris this December.”

Europe will get the flavor in September, and Asia, by the end of the year.

Partners in the Save Our Swirled campaign:

And here’s the best news, besides the ice cream—with Tesla Motors, the ice cream maker has masterminded an eco-friendly ice cream truck from a revamped 100% electric Tesla Model S. It carries more than 1,000 scoops worth of ice cream. In the front trunk there’s a “Climate Action” station where customers can sign the Avaaz climate change petition.

Ben & Jerry’s has been fighting for our climate and working on reducing the environmental impact of their business since 2002, when they launched a carbon offsets program for the Vermont manufacturing facilities tucked away near Stowe Mountain—well worth a visit (and a taste!) if you’re in the neighborhood! In 2007, they began a global warming advocacy campaign in partnership with the Dave Matthews Band. Human rights and marriage equality have also been on the Ben & Jerry’s agenda.

The company website says, “There is no quick fix to solve climate change, but we know what we need to do. We must: