Skip to content
Loading...
How A Small School In Rural Zambia Will Finally Get Electricity
7 Water And Energy Conservation Strategies For Large Families
How 200 Solar Lights Found Their Way To A Small School In Rural Zambia
Ørsted Consolidates Customer Solutions & Bioenergy Divisions
India’s NTPC Limited Offers Solar Power Project Management Services To ISA Members
5 Tips to Make Your First Bike Commute to the Office a Successful One
Congress Charges Ahead on Energy Storage: (BEST) Act
First Round of 15 Winners of Reinventing Cities Competition Announced, Creating New Beacons of Sustainable Design & Construction
5 Major UK Businesses Powered by Renewable Energy
Buy An Electric Car And Save The Planet! Not So Fast, Consider The Alternatives First
Why Do Republicans Now Hate On Christian Morals, National Security, Democracy, The US Constitution, The Rule Of Law, The FBI, The CIA, Honesty, & The US Deficit?
Don The Con & Crew Creating Alternative Reality That Is Almost Completely Fake
Nasty Gas Smells In Long Beach Launch AQMD Long-Term Investigation — We’re There, And It’s About Time!
Climate ChangeDisasters & Extreme WeatherGlobal Warming 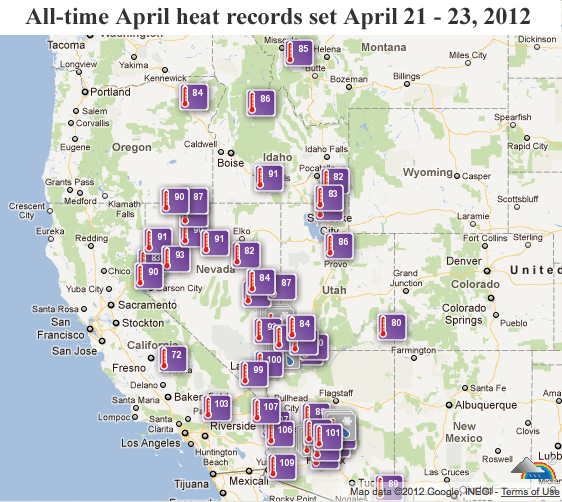 All-time heat records for the month of April were set at 56 stations April 21 – 23, including at seven major cities. Image taken from wunderground’s new extremes page.

Yeah, I don’t think they call it “Death Valley” for nothing, and it certainly isn’t called “global warming” for nothing.  The world is getting hotter and hotter, and with that comes thousands upon thousands of heat records. One of the latest is not just a heat record for one city or state or region — it’s a heat record for the entire US for the month of April (Death Valley is the hottest National Park with a record temperate of 134 degrees in July 1913).

“Nearly every weather station in the Inter-mountain West has broken, tied, or come within 1- 2 °F of their all-time record April heat record since Sunday. Most notably, the 113°F measured at Furnace Creek in Death Valley, California on Sunday, April 22 was tied for the hottest April temperature ever recorded in the U.S.”

For more information, see the Wunderground story linked above.