Skip to content
Loading...
How A Small School In Rural Zambia Will Finally Get Electricity
7 Water And Energy Conservation Strategies For Large Families
How 200 Solar Lights Found Their Way To A Small School In Rural Zambia
Ørsted Consolidates Customer Solutions & Bioenergy Divisions
India’s NTPC Limited Offers Solar Power Project Management Services To ISA Members
5 Tips to Make Your First Bike Commute to the Office a Successful One
Congress Charges Ahead on Energy Storage: (BEST) Act
First Round of 15 Winners of Reinventing Cities Competition Announced, Creating New Beacons of Sustainable Design & Construction
5 Major UK Businesses Powered by Renewable Energy
Buy An Electric Car And Save The Planet! Not So Fast, Consider The Alternatives First
Why Do Republicans Now Hate On Christian Morals, National Security, Democracy, The US Constitution, The Rule Of Law, The FBI, The CIA, Honesty, & The US Deficit?
Don The Con & Crew Creating Alternative Reality That Is Almost Completely Fake
Nasty Gas Smells In Long Beach Launch AQMD Long-Term Investigation — We’re There, And It’s About Time!
Disasters & Extreme Weather 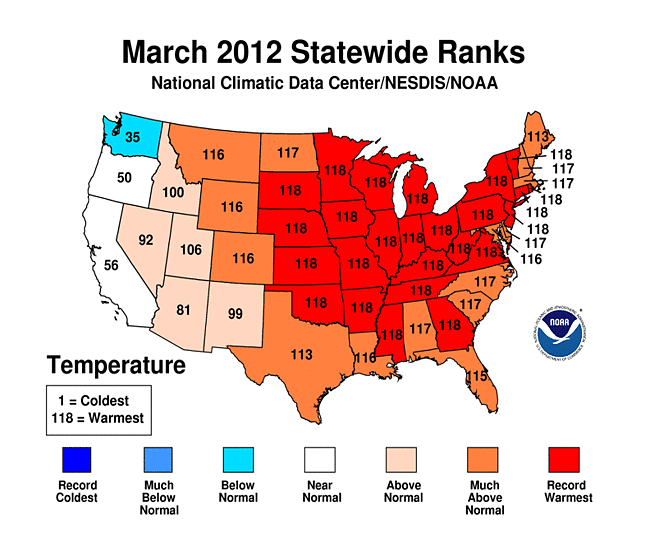 March 2012 was remarkable not simply because it was the warmest March on record for the contiguous United States, nor is it remarkable for the more than 15,000 warm temperature records broken in March, the early March tornado outbreak, or the fact that it contributed to the warmest first quarter on record; March was remarkable because all of those things happened.

The National Oceanic and Atmospheric Administration’s National Climatic Data Center released their monthly State of the Climate report for March, highlighting all the records and near-record breaking temperatures that dominated the eastern to-thirds of the U.S.

The average temperature of 51.1°F was 8.6 degrees above the 20th century average for March and 0.5°F warmer than the previous warmest March in 1910. Of the more than 1,400 months (117+ years) that have passed since the U.S. climate record began, only one month, January 2006, has seen a larger departure from its average temperature than March 2012.