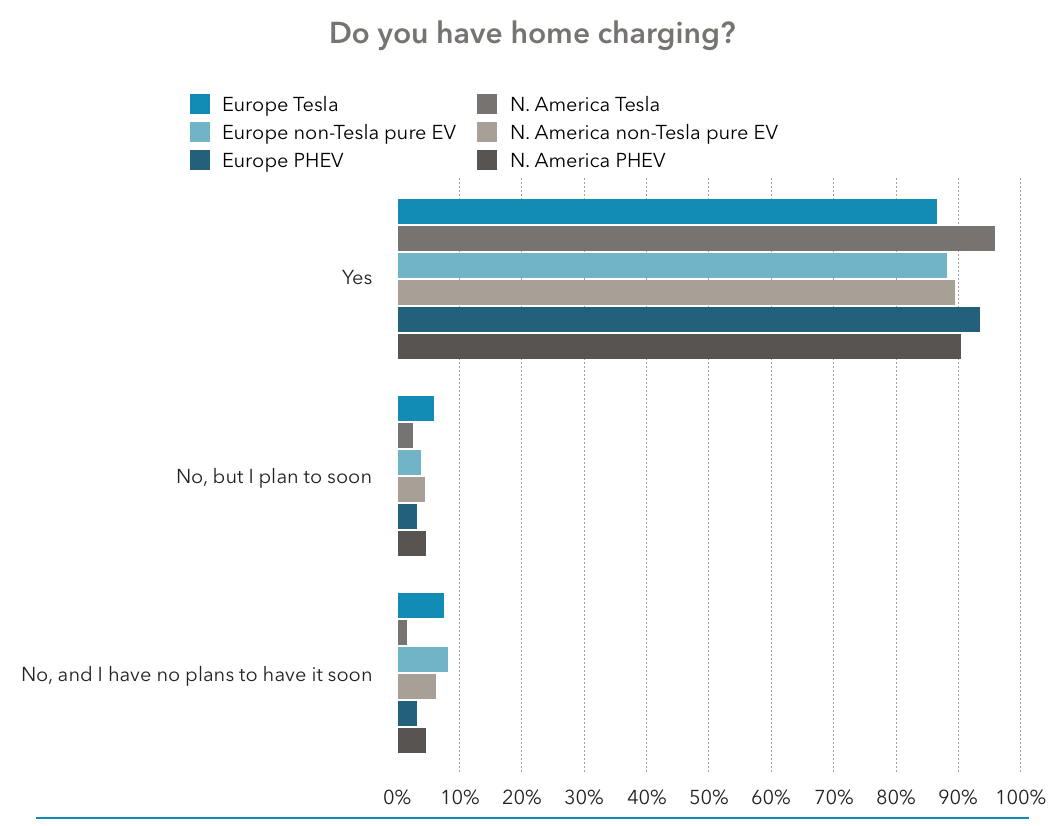 You can’t talk about electric cars without talking about electric car charging. So, it’s not surprising that the charging section of our new 93-page electric car driver report is the largest section of the report. The biggest differences when going from a gas car to an electric car are probably the lack of emissions, the instant torque, the quiet driver, the fact that you can often charge at home (and/or work), longer “refueling”/charging times, and shorter driving range. Charging is the only factor there that comes with pros and cons — more convenient charging locations … but not always; longer charging times … but no need to stand at the pump, and the ability to have a charging station in your garage.

So, it was with a great degree of curiosity that we explored EV charging experiences and needs by type of EV and region for our latest EV report. What’s the story for Tesla drivers, non-Tesla fully electric car drivers, and plug-in hybrid drivers? What’s the story for Americans vs Europeans? We already covered the desire and demand for fast charging and superfast charging in a previous section, but we dive much more into other charging matters here. Jump down below the line for the results.

If you’ve read the report intro in one of our previous articles about the new report, just jump down below the line to get into the article itself. In case you missed previous intros, though, here’s a short summary of the report: First of all, let’s get a sense of how much current EV drivers actually use Level 2 charging.

It turns out that 19–35% of EV drivers (depending on group) use public Level 2 charging stations less than once a year. Another 2–7% use it just once a year, and 13–24% use it just a few times a year. Breaking the sum of those figures down by group, these are the percentages of respondents who charge on public Level 2 charging stations a few times a year or less:

In general, the biggest implied takeaway there for me is that the public charging market is going to be much, much smaller than the gas station market. People don’t need to charge much outside of home (and even less so if they have workplace charging, which I assume will become the norm).

Another point to highlight right here is that living with an electric car is super convenient. Due to the convenience of home charging (you can essentially start each day with a full charge), the need to go out and find a charging station at some point in the middle of one’s errands is unusual.

That said, some EV drivers do currently charge at public Level 2 stations every day, and many others do so a few times a week or once a week. As CleanTechnica’s long-term Nissan LEAF reviewer with no home charging has shown, even that can be extremely convenient and pleasant, but it does require adequate and properly placed public charging stations. Looking at the specific stats by group again, here are the percentages of respondents who charge at a public charging station every day:

And here are the percentages of respondents who charge at a public charging station at least once a week:

It’s unclear to what degree respondents rely on public charging rather than use it just because it’s there (well, plug-in hybrid drivers certainly don’t “need” it), but these responses do indicate decent use of public charging.

As I think the results from Tesla drivers in North America show, however, if the car has enough range, this use can drop considerably.  When you consider that we seldom drive more than 50 miles in a day, it’s logical that we would regain that range via overnight charging and, if our car has >200 miles of range, we would rarely need to use a public charging station. Given how many respondents indicated they use Supercharging a few times a month or even more frequently, it seems that the 400 kWh per year of free Supercharging is likely to be quite a bit less than many initial owners have been using. I doubt this will deter many buyers, but it’s an interesting drop in product value nonetheless.

Related to the above topics, we asked respondents how adequate the current EV charging network is for long-distance trips. For Tesla drivers, we asked this question in a straightforward manner. For the other EV drivers, we asked them how adequate the network would be if they had an electric car with over 200 miles of range. (No matter what the charging network is like, electric cars with 70 miles of range are challenging for road trips, but with the near arrival of the Chevy Bolt and Tesla Model 3, we figured this question was relevant to the near future and that respondents had thought a bit about it.) Similarly, the vast majority of non-Tesla EV drivers consider the current EV charging network to be adequate for long-distance trips, but far less than 50%, on average, consider it to be “very adequate.”

Looking at some specific figures, these were the percentages of respondents (by group) who thought the existing EV charging network was somewhat or very adequate:

And these are the percentages of respondents who thought the network was very adequate:

The challenge here is that we don’t actually know how many of the respondents were considering the Supercharger network (exclusive to Tesla vehicles at the moment) when answering this question.

Nonetheless, it seems clear that most respondents see current EV charging possibilities as good enough for long-distance travel — if not super adequate for that.

On the flip side, these are the percentages that see the current EV charging network as somewhat or very inadequate:

Critical factors for public charging stations to be useful are that they be convenient, accessible, and reliable. We dove into these topics a bit via our surveys as well. There’s certainly room for improvement, but our results indicate that current EV charging infrastructure is quite convenient and accessible for EV drivers of all types. There’s notable variation by type of EV, but the overall results are pretty positive, especially if you consider that next-gen EVs will often have over 200 miles of range instead of 60–110 miles. Taking out the N/A answers, 47–73% of EV drivers we surveyed consider the EV charging stations they use to be somewhat or very conveniently located. The specific breakdown by group and type of EV is as follows:

Similarly, but a bit more positively, 66–87% of drivers consider those EV charging stations to be accessible. The specific breakdown is: Yet again, there’s certainly room for improvement — can you imagine 10–30% of gas car drivers having reliability problems with the gas stations they use? Nonetheless, a large majority of respondents did consider the charging stations they used to be somewhat or very reliable.

Overall, the findings from these questions and responses showed that current EV drivers do, in large part, find the current charging infrastructure convenient, accessible, and reliable, but there’s a lot of potential to improve on each of these matters.

As with other studies of early EV drivers, the vast majority of the EV drivers we surveyed had home charging, but rather than 97–99% as some of these other surveys have found, the percentages from the groups we surveyed were 88–96%. However, if you add in the respondents who planned to have home charging soon, the numbers rise to 92–98%. One charging-related question that we haven’t seen elsewhere and brought into this study was how often forgetting or neglecting to charge at home led people to inconvenience later — either needing to charge in public (in the case of pure EV drivers) or needing to get gas (in the case of plug-in hybrids). The responses indicated that it doesn’t happen often, but it does happen for many drivers.