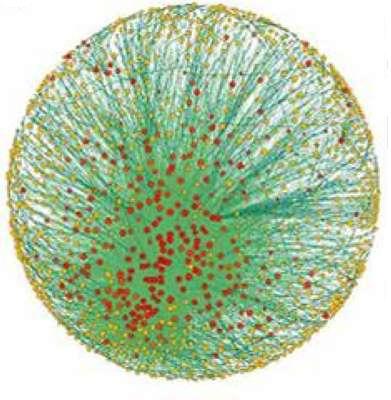 In the first such analysis ever conducted, Swiss economic researchers have conducted a global network analysis of the most powerful transnational corporations (TNCs). Their results have revealed a core of 737 firms with control of 80% of this network, and a “super entity” comprised of 147 corporations that have a controlling interest in 40% of the network’s TNCs.

[Note to the reader: see the very end of this article for a ranking of the top 50 ‘control holders’]

When we hear conspiracy theorist talk about this or that powerful group (or alliance of said groups) “pulling strings” behind the scenes, we tend to dismiss or minimize such claims, even though, deep down, we may suspect that there’s some degree of truth to it, however distorted by the theorists’ slightly paranoid perception of the world. But perhaps our tendency to dismiss such claims as exaggerations (at best) comes from our inability to get even a slight grip on the complexity of global corporate ownership; it’s all too vast and complicated to get any clear sense of the reality.

But now we have the results of a global network analysis (Vitali, Glattfelder, Battiston) that, for the first time, lays bare the “architecture” of the global ownership network. In the paper abstract, the authors state:

“We present the ﬁrst investigation of the architecture of the international ownership network, along with the computation of the control held by each global player. We ﬁnd that transnational corporations form a giant bow-tie structure* and that a large portion of control ﬂows to a small tightly-knit core of ﬁnancial institutions. This core can be seen as an economic “super-entity” that raises new important issues both for researchers and policy makers.” [emphasis added]

* This “bow tie” structure is similar to the structure of the WWW (analyzing for most influential/most trafficked websites); see diagram below.

Data from previous studies neither fully supported nor completely disproved the idea that a small handful of powerful corporations dominate much or most of the world’s commerce. The researchers acknowledge previous attempts to analyze such networks, but note that these were limited in scope to national networks which “neglected the structure of control at a global level.”

What was needed, assert the researchers, was a complex network analysis.

“A quantitative investigation is not a trivial task because ﬁrms may exert control over other ﬁrms via a web of direct and indirect ownership relations which extends over many countries. Therefore, a complex network analysis is needed in order to uncover the structure of control and its implications. “

To start their analysis, the researchers began with a list of 43,060 TNCs which were taken from a sample of 30 million “economic actors” contained in the Orbis 2007 database [see end note]. TNCs were identified according to the Organization of Economic Co-operation and Development (OECD) definition of a transnational corporation [see end note]. They next applied a recursive search algorithm which singled out the “network of all the ownership pathways originating from and pointing to these TNCs.”

In terms of the connectivity of the network, the researchers found that it consists of many small connected components, but the largest one (encompassing 3/4 of all nodes) “contains all the top TNCs by economic value, accounting for 94.2% of the total TNC operating revenue.”

1] A strongly connected component (SCC), that is, a set of ﬁrms in which every member owns directly and/or indirectly shares in every other member. The emergence of such a structure can be explained as a means of preventing take-overs, reducing transaction costs, risk sharing and increasing trust between “groups of interest.”

2] The largest connect[ed] component contains only one dominant, strongly connected component (comprised of 1347 nodes). This network, like the WWW, has a bow tie structure. What’s more, they found that this component, or core, is also very densely connected; on average, members of this core have ties to 20 other members. “Top actors” occupy the center of the bow tie. In fact, a randomly chosen TNC in the core has about 50% chance of also being among the top holders, as compared to, for example, 6% for the “in” section. [emphasis added]

“As a result, about 3/4 of the ownership of ﬁrms in the core remains in the hands of ﬁrms of the core itself. In other words, this is a tightly-knit group of corporations that cumulatively hold the majority share of each other.”

In examining the details of this core, the analysis also showed that only 737 top holders accumulate 80% of the control over the value of all TNCs (in the analyzed network). Further,

“…despite its small size, the core holds collectively a large fraction of the total network control. In detail, nearly 4/10 of the control over the economic value of TNCs in the world is held, via a complicated web of ownership relations, by a group of 147 TNCs in the core, which has almost full control over itself. The top holders within the core can thus be thought of as an economic “super-entity” in the global network of corporations.” [emphasis added]

Regarding the first question, the authors  assert that no matter the origin of the SCC, due to its high degree of TNC network control, “it weakens market competition”.

It is clear just from the history of anti-trust laws in this country (the U.S.) that concentrated ownership stifles free market competition and innovation, reduces over-all employment, and leads to excessive pricing.

In regards to the second question, the researchers note that “the existence of such a core in the global market was never documented before and thus, so far, no scientific study demonstrates or excludes that this international ‘super-entity’ has ever acted as a bloc.“

However, there is historical data — such as within the airline, auto and steel industries — supporting this possibility.

“…top holders are at least in the position to exert considerable control, either formally (e.g., voting in shareholder and board meetings) or via informal negotiations.”

Additionally, recent studies (Stiglitz J.E., 2010, Battiston S. et al, 2009) have shown that densely connected ﬁnancial networks are highly susceptible to systemic risk. Despite the fact that such networks may seem robust in good economic times, in times of crisis however, member firms tend to enter ‘distress mode’ simultaneously. This was seen recently in the 2008 (“near”) financial collapse (note: 3/4 of the network core in this analysis are ﬁnancial intermediaries).

Calling their findings “remarkable”, they suggest that because “international data sets as well as methods to handle large networks became available only very recently, [this] may explain how this ﬁnding could go unnoticed for so long.”

While the researchers acknowledge that verifying whether the implications of their findings “hold true for the global economy” is beyond the scope of their current research, they assert that their unprecedented attempt to uncover the structure of corporate control is “a necessary precondition for future investigations.”

The paper, The network of global corporate control (Vitali, Glattfelder, Battiston) was published July 26, 2011, on arXiv.org

The Orbis 2007 marketing database comprises about 37 million economic actors, both physical persons and ﬁrms located in 194 countries, and roughly 13 million directed and weighted ownership links (equity relations).  This data set is intended to track control relationships rather than patrimonial relationships. Whenever available, the percentage of ownership refers to shares associated with voting rights. Accordingly, we select those companies which hold at least 10% of shares in companies located in more than one country. Overall we obtain a list of 43,060 TNCs located in 116 different countries, with 5675 TNCs quoted in stock markets.

{source: the following is quoted directly from the research paper]

This is the ﬁrst time a ranking of economic actors by global control is presented. Notice that many actors belong to the ﬁnancial sector (NACE codes starting with 65,66,67) and many of the names are well-known global players.

The interest of this ranking is not that it exposes unsuspected powerful players. Instead, it shows that many of the top actors belong to the core. This means that they do not carry out their business in isolation but, on the contrary, they are tied together in an extremely entangled web of control. This ﬁnding is extremely important since there was no prior economic theory or empirical evidence regarding whether and how top players are connected.

Shareholders are ranked by network control (according to the threshold model, TM). Columns indicate country, NACE industrial sector code, actor’s position in the bow-tie sections, cumulative network control. Notice that NACE codes starting with 65,66, or 67 belong to the ﬁnancial sector.