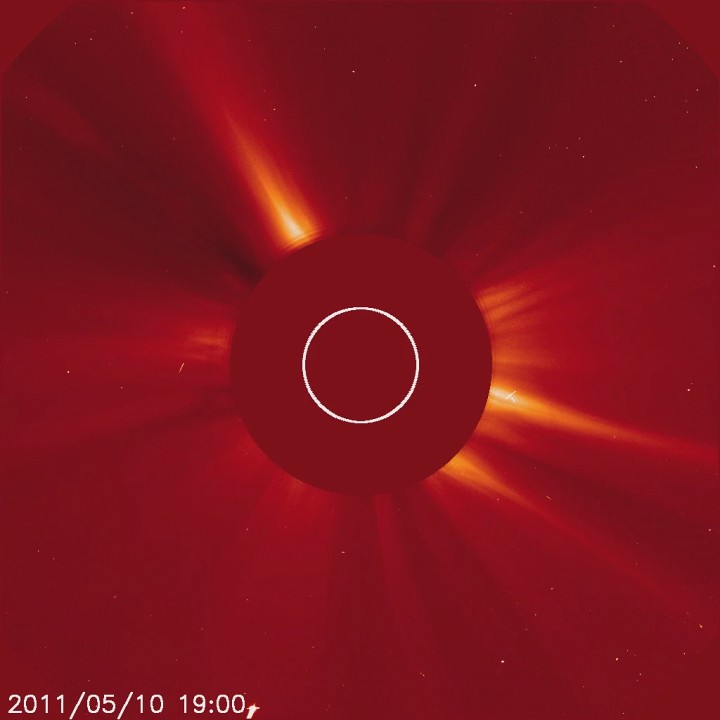 That’s pretty cool, eh? The comet, apparently, did not cause the explosion, and scientists have found no “convincing physical connection between sun-grazing comets and coronal mass ejections.” However, this video sure makes it look like the comet caused the explosion.

In case you were wondering, the Sun is blocked out in the video so that much less bright objects (like the comet) can be more easily seen.

Here’s more from NASA/SOHO via the NASA Goddard Photo and Video flickr page:

“SOHO watched as a fairly bright comet dove towards the Sun in a white streak and was not seen again after its close encounter (May 10-11, 2011). The comet, probably part of the Kreutz family of comets, was discovered by amateur astronomer Sergey Shurpakov. In this coronagraph the Sun (represented by a white circle) is blocked by the red occulting disk so that the faint structures in the Sun’s corona can be discerned. Interestingly, a coronal mass ejection blasted out to the right just as the comet is approaching the Sun.”