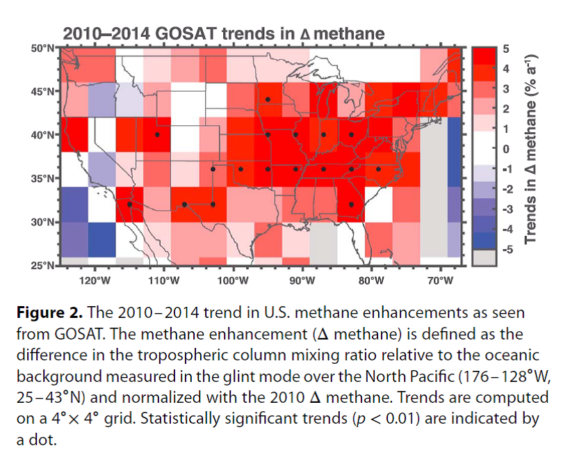 Originally published by gws on SkepticalScience.com

A relatively large number of research publications has appeared in the peer-reviewed literature since we last updated our readers on fracking and methane, CH4, emissions. We cannot discuss them all here. However, in summary, it can be concluded from these papers that EPA is very likely underestimating fossil fuel related methane emissions in its greenhouse gas inventory, anywhere between 30% and 100%, possibly even more. Meaning, in order for the US to effectively lower its greenhouse gas emissions, it also needs to get fugitive methane emissions under control.

The US administration has reacted to the new data, and EPA issued a number of regulatory actions. In addition, EPA has begun to update its inventory. However, a look at the inventoried totals …

… and the “energy” related emissions …

Meanwhile, global atmospheric methane concentrations continue to rise. There is evidence from satellite observations that US emissions have increased by 30% or more in the last decade, and a substantial amount of the global increase could be explained by increasing US emissions.

However, there is also indirect isotopic evidence that the global increase is dominated instead by a biogenic source, with the authors highlighting agriculture in East Asia. The latter is somewhat corroborated by where most of the atmospheric methane seems to come from, namely the tropics, but there remain large estimate ranges in part due to limited measurement capabilities at tropical latitudes.

Independent evidence comes from global observations of atmospheric ethane, which turns out to be an excellent tracer of fossil fuel related hydrocarbon emissions. While ethane’s abundance had been dropping for decades as the industry’s fossil fuel exploration activities had been becoming more efficient, it appears to be increasing in the atmosphere again, with especially high emissions from shale regions that produce oil. TheNature Geoscience authors estimated an ethane emissions increase of approximately 0.4 million metric tons per year, seemingly all from North America. Since, ethane is typically five to ten times less abundant relative to methane in oil and gas sources (on a molar basis), one can estimate an annual methane emission of 1-2 million metric tons from that, with a likely range of 0.5-4 million metric tons CH4 (Helmig et al. estimate a lower median ethane-to-methane ratio, thus arrive at the upper end of this range). That turns out to be about 5-10% (at most about 25%) of the observable global annual increase of methane in the atmosphere (virtually all of it in the northern hemisphere), and is therefore roughly consistent with the above notion from isotopic analysis that the renewed global methane increase is not dominated by increasing fossil fuel-related emissions.

Ethane was also used in another study to estimate that, globally, relative leak rates are likely in the 2-4% range, and Carbon Brief has just summarized some data to show that the US and Russia are among the worst offenders.

Part of the reason for the discrepancy to inventories comes from what has been dubbed “super-emitters”; the fact that the distribution of emission rates from the plethora of individual sources in the oil and gas industry (such as leaking valves, tanks, compressors, etc.) is poorly characterized by a well-behaved bell-curve. Instead, emissions appear to be dominated by a relatively small subset of high emitting sources, creating highly skewed emission rate distributions. This has been discussed in various research papers, such as here, here, here, and a presentation by Stanford University’s Adam Brandt here.

It turns out that hydrocarbon emissions from storage tanks are a major source, a source however, that could rather effectively be abated, and that has been known for many years, with EPA addressing “VOC new source performance standards” as early as 2012. This has yet to make a difference, because it addresses only new, not existing sources (including storage tanks).

Since EPA is not accounting for super-emitters through a skewed emission rate distribution, it is blind to their emissions.

In addition, since EPA’s inventory is based on a classical bottom-up calculation that relies on input data from individual, small-scale measurements such as performed by industry itself and in industry’s favorite peer-reviewed study, it is useful to point out that a significant subset of those measurements have been shown to be biased low.

What does it all mean?

Keeping global warming below 2 degrees Celsius relative to pre-industrial average surface air temperatures requires keeping most of the known fossil fuel reserves in the ground. The term “unburnable carbon” has become widely used to describe how much fossil fuel assets could become stranded assets in the coming years, were we to follow the goals as laid out by the Paris agreement. While industry is heavily promoting the replacement of coal with natural gas to lower CO2 emissions from electricity production, now, an additional caveat has been proposed, namely that the amount of unburnable carbon is in fact even larger considering the amount of methane that may be leaked while exploring the fossil carbon already on the books (aka “burnable carbon”). The authors call it “unleakable carbon”, stating that

“We demonstrate that unless unleakable carbon is curtailed, up to 80–100% of our global natural gas reserves must remain underground if we hope to limit warming to 2°C from 2010 to 2050.”

Their best case scenario assumes that relative leak rates, globally, are about 50% higher than what EPA currently estimates (based on Brandt et al., 2014). Since we know by now that even that could be too optimistic, it becomes more and more obvious that a switch from coal to natural gas for electricity production is not likely to curb global warming effectively, but rather delay effective measures further.