Skip to content
Loading...
How A Small School In Rural Zambia Will Finally Get Electricity
7 Water And Energy Conservation Strategies For Large Families
How 200 Solar Lights Found Their Way To A Small School In Rural Zambia
Ørsted Consolidates Customer Solutions & Bioenergy Divisions
India’s NTPC Limited Offers Solar Power Project Management Services To ISA Members
5 Tips to Make Your First Bike Commute to the Office a Successful One
Congress Charges Ahead on Energy Storage: (BEST) Act
First Round of 15 Winners of Reinventing Cities Competition Announced, Creating New Beacons of Sustainable Design & Construction
5 Major UK Businesses Powered by Renewable Energy
Buy An Electric Car And Save The Planet! Not So Fast, Consider The Alternatives First
Why Do Republicans Now Hate On Christian Morals, National Security, Democracy, The US Constitution, The Rule Of Law, The FBI, The CIA, Honesty, & The US Deficit?
Don The Con & Crew Creating Alternative Reality That Is Almost Completely Fake
Nasty Gas Smells In Long Beach Launch AQMD Long-Term Investigation — We’re There, And It’s About Time!
Architecture & DesignGreen Your LifeRenewable EnergySolar Energy

2015 has been a good year for SolarCity after tallying over one-third of all residential rooftop installations in this country.

The five leading US installers accounted for more than half of all residential solar installations between Q1 and Q3 of this year. But SolarCity has claimed the lion’s share of this market pie, reporting 34% of residential solar PV installations in the first three-quarters of 2015, according to GTM Research’s ‘US PV Leaderboard: Q4 2015‘.

The market share of the leading US residential solar installers in this period are listed as follows: 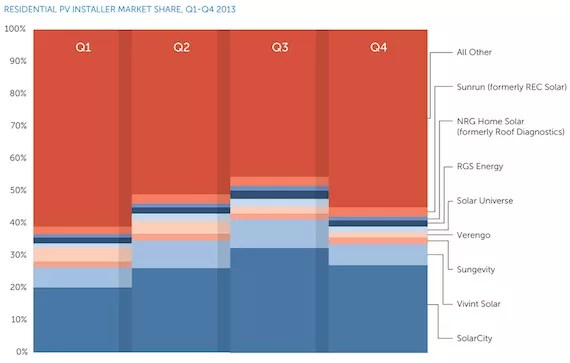 GTM Research also reports this is the third year the US residential market has seen more than 50% growth. This encouraging data provides sound news for the solar energy industry and for renewable energy overall.

The research report concluded, “This rapid growth can largely be attributed to the widespread availability and increasing diversity of financing solutions.” Lower pricing should also be counted as a contributor to this growth picture.

The US Department of Energy has reported,

“Since President Obama took office, the number of homes with rooftop solar has grown from more than 66,000 to 734,000. Last year, the solar industry added jobs 10 times faster than the rest of the economy and solar represented 40 percent of all new electric generating capacity brought online in the first half of 2015. Since the beginning of 2010, the average cost of a solar electric system has dropped by 50 percent. In fact, distributed solar prices fell 10 to 20 percent in 2014 alone. And since President Obama took office, solar power has increased twenty fold.”

We look forward to charting similar growth data for residential rooftop solar in the coming year.