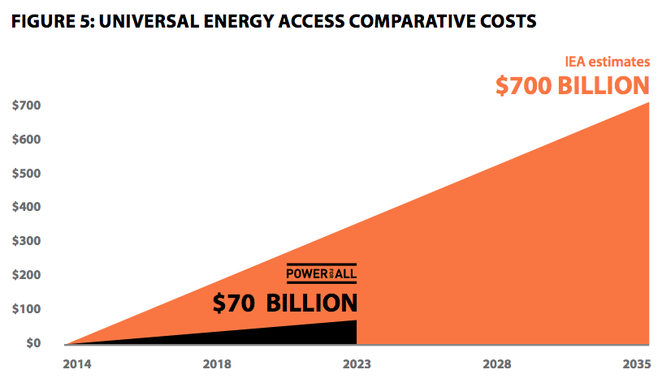 This story was first published on SolarLove. Reprinted with permission.

Power for All is a global campaign dedicated to promoting the fastest, most cost-effective, and most sustainable approach to universal energy access. It was first introduced at the United Nation’s Sustainable Energy For All forum in New York on May 21, 2015, reports TreeHugger.

”We shouldn’t have to wait an entire generation for universal energy access when decentralized, renewable, and market-based solutions can deliver energy access today,” said Koen Peters, executive director of the Global Off-Grid Lighting Association, and a founding member of the Power for All campaign. “The market for solar light and power in the developing world is growing quickly to meet demand, and already reaching millions of households. Several GOGLA member companies are already outpacing the world’s traditional electrical utilities in terms of number of customers.”

The Power For All vision is bold. It claims that access to distributed, democratized, and renewable energy is not just feasible, but can be delivered twice as fast and at 10% of the cost of the top-down, centralized model that has dominated the electrical energy industry since George Westinghouse first invented the centralized grid system. It especially focuses on rural communities in much of Africa and parts of Asia that are too remote to ever be served by a traditional grid distribution system.

For die-hard capitalists who are committed to profits ahead of sustainable living, Power For All says its vision can be achieved using market-based approaches. Doing so will allow the world’s 1.2 billion citizens who currently lack access to reliable electricity to invest in, influence, and have ownership of their own energy future.

Let’s think about that for a moment. Power is more than just another name for electricity. It represents the ability of people to control their own lives, determine their own destinies, and make their own contributions to the global community. Who knows how many Elon Musks or Thomas Edisons or Nikola Teslas are out there in the underdeveloped world, just waiting to be empowered by electricity so they can make a contribution to the world community?

Access to abundant, affordable electrical energy is about more than driving an expensive battery-powered electric car. It is about lifting people out of poverty and making them productive, healthy, valued members of society. The International Energy Agency says universal energy could be achieved by 2035 at a cost of $700 billion. Power For All says it can be done by 2025 at a cost of only $70 billion. The group wants to make its plan a central focus of the next world conference on climate change in Paris this December.

Andrew Webb, CEO of Solar Aid, one of the charities supporting the campaign, describes the opportunity: “The Power for All campaign is a powerful way to profile the extraordinary potential of distributed renewables. Off-grid energy solutions are not only cost effective but as SolarAid’s work shows, they can be rapidly deployed. Already solar lights across Africa will save families an estimated $500 million in 2015. With greater support for the sector, that figure could skyrocket. People across the continent are demanding the chance for cleaner energy, better health and greater opportunity. We do not have to wait. Indeed, we must not.”

With a promise like that, why would anyone want to wait? That’s an excellent question. The answer is that “power” is also a term that implies control over others. In today’s world, hundreds of enormous corporations have power over the global marketplace and they will strongly resist any initiative that threatens to reduce that power or the profits that flow to them as a result of it.

Among its activities, Power for All will urge world leaders to institute policies that support renewable, decentralized solutions. It will also encourage governments, NGOs, investors and banks to mobilize capital specifically for decentralized, renewable solutions. Part of the Power For All mission is to promote the idea of grants that encourage sustainable, market-based initiatives leading to decentralized energy solutions for universal energy access.

The Power For All initiative has echoes of the “power to the people” movement in America in the 1960s. That sentiment got co-opted by the very market forces Power For All seeks to harness. Will the result be different this time?

Image by Power For All