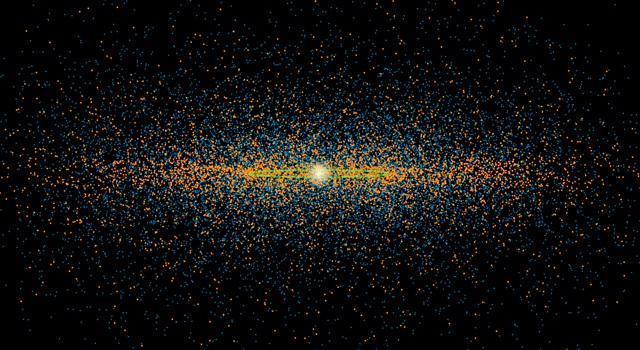 Potentially Hazardous Asteroids (PHAs) are about twice as common as originally thought, according to new research by NASA.

PHAs are a subsection of the more common near-Earth asteroids. But they follow an orbit very similar to the Earth’s, coming within five million miles. And they are large enough to survive passing through the Earth’s atmosphere, and could cause catastrophic damage upon impact.

The research was done by using NASA’s Wide-field Infrared Survey Explorer (WISE) to observe and assess the number of PHAs in our solar system. The asteroid-hunting part of the WISE mission is called the Near-Earth Object Observation Project (NEOWISE).

Their findings estimate that there are 4,700 PHAs with diameters bigger than 330 feet. About 20-30 percent of these objects have been found and tracked.

“New results from NASA’s NEOWISE survey find that more potentially hazardous asteroids, or PHAs, are closely aligned with the plane of our solar system than previous models suggested. PHAs are the subset of near-Earth asteroids (NEAs) with the closest orbits to Earth’s orbit, coming within 5 million miles (about 8 million kilometers). They are also defined as being large enough to survive passage through Earth’s atmosphere and cause damage on a regional, or greater, scale.”

“The NEOWISE analysis shows us we’ve made a good start at finding those objects that truly represent an impact hazard to Earth,” said Lindley Johnson, program executive for the Near-Earth Object Observation Program at NASA Headquarters in Washington. “But we’ve many more to find, and it will take a concerted effort during the next couple of decades to find all of them that could do serious damage or be a mission destination in the future.”

The new research suggests that there are about twice as many PHAs in ‘lower-inclination’ orbits. Which means that they are more aligned with the Earth’s orbit, and more likely to impact.

The researchers also discovered that many PHAs tend to be bright, signifying that they are likely made of stone or metal. The composition of an asteroid affects how quickly it would burn up in the atmosphere were it to impact the Earth.

“NASA’s NEOWISE project, which wasn’t originally planned as part of WISE, has turned out to be a huge bonus,” said Amy Mainzer, NEOWISE principal investigator, at NASA’s Jet Propulsion Laboratory in Pasadena, Calif. “Everything we can learn about these objects helps us understand their origins and fate. Our team was surprised to find the overabundance of low-inclination PHAs. Because they will tend to make more close approaches to Earth, these targets can provide the best opportunities for the next generation of human and robotic exploration.”