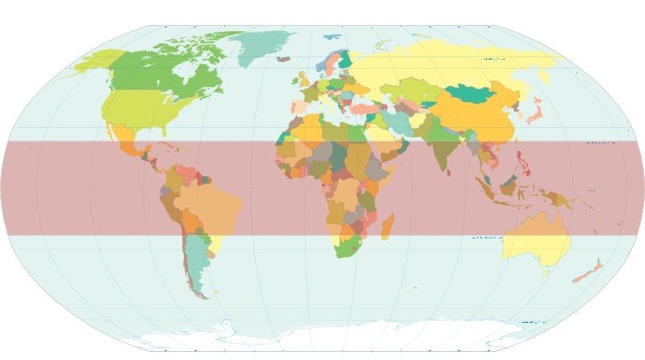 Manmade pollutants, such as black carbon and tropospheric ozone, are most likely what’s causing the tropical belt expansion northward, a new study says.

The lead author of the study, Robert J. Allen, notes that continuing expansion will have large-scale impacts on atmospheric circulation worldwide.

“If the tropics are moving poleward, then the subtropics will become even drier,” Allen said. “If a poleward displacement of the mid-latitude storm tracks also occurs, this will shift mid-latitude precipitation poleward, impacting regional agriculture, economy, and society.”

Recent observations have shown that the tropics have been widening by 0.7 degrees every decade, with global warming contributing some, but not all, of the tropical expansion.

“Both black carbon and tropospheric ozone warm the tropics by absorbing solar radiation,” Allen explained. “Because they are short-lived pollutants, with lifetimes of one-two weeks, their concentrations remain highest near the sources: the Northern Hemisphere low- to mid-latitudes. It’s the heating of the mid-latitudes that pushes the boundaries of the tropics poleward.”

As the tropics expand, they also bring with them wind and precipitation patterns, potentially drying out the tropics relative to their current state.

“For example, the southern portions of the United States may get drier if the storm systems move further north than they were 30 years ago,” he said. “Indeed, some climate models have been showing a steady drying of the subtropics, accompanied by an increase in precipitation in higher mid-latitudes. The expansion of the tropical belt that we attribute to black carbon and tropospheric ozone in our work is consistent with the poleward displacement of precipitation seen in these models.”

Black carbon aerosols are tiny particles of carbon created from the burning of biomass, and incomplete fossil fuel combustion, such as in diesel engines.

“Greenhouse gases do contribute to the tropical expansion in the Northern Hemisphere,” Allen said. “But our work shows that black carbon and tropospheric ozone are the main drivers here. We need to implement more stringent policies to curtail their emissions, which would not only help mitigate global warming and improve human health, but could also lessen the regional impacts of changes in large-scale atmospheric circulation in the Northern Hemisphere.”

Thomas Reichler, an associate professor of atmospheric sciences at the University of Utah, is quoted as saying, “For a long time it has been unclear to the research community why climate models were unable to replicate the observed changes in the atmospheric wind structure. This work demonstrates now in very convincing ways that changes in the amount and distribution of tiny absorbing particles in the atmosphere are responsible for the observed changes. Since previous model simulations did not account properly for the effects of these particles on the atmosphere, this work provides a surprisingly simple but effective answer to the original question.”

“The question to ask is how far must the tropics expand before we start to implement policies to reduce the emissions of greenhouse gases, tropospheric ozone and black carbon that are driving the tropical expansion?” said Allen.