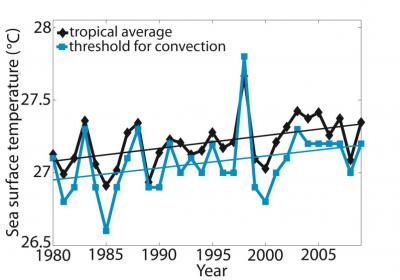 It is a long standing belief that hurricanes and tropical ocean thunderstorms occur when sea surface temperatures rise above a certain level. However, what happens when the ocean temperature rises? Does that storm level keep rising, or does it stay the same and allow an increase in the frequency with which storms appear.

A new study by researchers at the International Pacific Research Center (IPRC) of the University of Hawaii at Manoa (UHM) has shown that the storm level – the threshold – is rising under global warming at approximately the same rate as the temperature of the tropical oceans.

“The correspondence between the two time series is rather remarkable,” says lead author Nat Johnson, a postdoctoral fellow at IPRC. “The convective threshold and average sea surface temperatures are so closely linked because of their relation with temperatures in the atmosphere extending several miles above the surface.”

Both have been rising approximately 0.1°C per decade.

The study also notes that global climate models predict that both sea surface temperature and the threshold for convection will continue to rise in tandem.