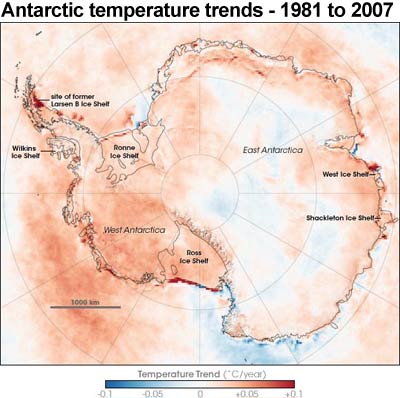 Unfortunately, rather than delve into the science, any time a climate change denier sees a statement that seems to go against the massive amount of scientific data and information showing that global weirding is happening, they cling to it with all their might and say, “Look! Look! The climate scientists are wrong!” If only we could live in that idyllic world.

Since Arctic sea ice is in a death spiral and is one of the clearest signs human-caused climate impacts are coming faster than expected, the disinformer side has been pressing its case that increasing southern sea ice somehow undercuts our understanding of what is going on in the climate system and why it is so worrisome.

Cook now has both a “basic” and “moderate” response, in addition to his shorter replies, which I repost below.

First, here is the ’skeptic’ argument:

‘Antarctic sea ice set a new record in October 2007, as photographs distributed by the National Oceanic and Atmospheric Administration showed penguins and other cold-weather creatures able to stand farther north on Southern Hemisphere sea ice than has ever been recorded. The news of expanding Antarctic sea ice stole headlines from global warming alarmists who asserted Arctic sea ice had reached its lowest extent since 1979.’ (James Taylor)

Here’s the one paragraph reply:

Antarctic sea ice has growing over the last few decades but it certainly is not due to cooling — the Southern Ocean has shown warming over same period. Increasing southern sea ice is due to a combination of complex phenomena including cyclonic winds around Antarctica and changes in ocean circulation.

Here is the basic rebuttal (written by James Wight):

Sea ice around Antarctica has been increasing over the last few decades that satellites have been measuring sea ice extent. Consequently, you often hear the refrain “Antarctica is gaining ice”. First of all, it’s worth remembering that sea ice is not to be confused with land ice. This distinction might seem obvious, but the two are often confused in media reports. Sea ice is frozen seawater floating on the surface, whereas land ice is a layer of snow that has accumulated over time on a landmass. Antarctica is losing land ice at an accelerating rate.

However, it is clear that the extent of sea ice around the coast of the continent is growing. Why? The first explanation which comes to mind is that the Southern Ocean must be cooling. But on the contrary, the Southern Ocean has warmed by around 0.5°C in the three decades since satellites began measuring sea ice trends.

The true reasons for the increasing ice are a complex set of factors. One factor is an increase in precipitation over the Southern Ocean, which means more snowfall. However, this trend is expected to reverse in coming decades as the Antarctic continues to warm.

Finally, southern sea ice is not particularly important to the climate. Unlike land ice, sea ice doesn’t affect sea levels because it’s already displacing water. And unlike the situation in the Arctic, where disappearing sea ice is making the Arctic Ocean less reflective and amplifying Arctic warming, a decline in southern sea ice would not warm the Antarctic climate. For as long as climatologists have studied it, the Southern Ocean has been almost ice-free in summer, the time of year when it would receive enough heat from the Sun to have a large effect. The issue of southern sea ice is really just a distraction which diverts our attention from the more important issue of sea ice melt in the Arctic.

Here is the Intermediate rebuttal (by Wight also):

The most common misconception regarding Antarctic sea ice is that sea ice is increasing because it’s cooling around Antarctica. The reality is the Southern Ocean surrounding Antarctica has shown strong warming over the same period that sea ice has been increasing. Globally from 1955 to 1995, oceans have been warming at 0.1°C per decade. In contrast, the Southern Ocean (specifically the region where Antarctic sea ice forms) has been warming at 0.17°C per decade. Not only is the Southern Ocean warming, it’s warming faster than the global trend. This warming trend is apparent in satellite measurements of temperature trends over Antarctica: Figure 2: Antarctic surface temperatures as observed by satellites between 1981 and 2007.

Similar trends are found when combining temperature data measured from ships and buoys. The following figure from Increasing Antarctic Sea Ice under Warming Atmospheric and Oceanic Conditions (Zhang 2007) displays trends over the ice-covered Southern Ocean – this is the region where Antarctic sea ice forms.

Oceanographic data also find that the waters in the Southern Ocean are warming. The waters of the Southern Ocean’s Antarctic Circumpolar Current have warmed more rapidly than the global ocean as a whole. From 1960 to 2000, water temperature increased by 0.068°C per decade at depths between 300 and 1000 metres. This warming trend has increased to 0.098°C per decade since the 1980s (Boning 2008).

If the Southern Ocean is warming, why is sea ice increasing? There are several contributing factors. One is the drop in ozone levels over Antarctica. The hole in the ozone layer above the South Pole has caused cooling in the stratosphere (Gillet 2003). A side-effect is a strengthening of the cyclonic winds that circle the Antarctic continent (Thompson 2002). The wind pushes sea ice around, creating areas of open water known as polynyas. More polynyas leads to increased sea ice production (Turner 2009).

Another contributor is changes in ocean circulation. The Southern Ocean consists of a layer of cold water near the surface and a layer of warmer water below. Water from the warmer layer rises up to the surface, melting sea ice. However, as air temperatures warm, the amount of rain and snowfall also increases. This freshens the surface waters, leading to a surface layer less dense than the saltier, warmer water below. The layers become more stratified and mix less. Less heat is transported upwards from the deeper, warmer layer. Hence less sea ice is melted (Zhang 2007).

Antarctic sea ice is complex and counter-intuitive. Despite warming waters, complicated factors unique to the Antarctic region have combined to increase sea ice production. The simplistic interpretation that it’s caused by cooling is false.

For more on what’s going on in the Antarctic, see: