Skip to content
Loading...
How A Small School In Rural Zambia Will Finally Get Electricity
7 Water And Energy Conservation Strategies For Large Families
How 200 Solar Lights Found Their Way To A Small School In Rural Zambia
Ørsted Consolidates Customer Solutions & Bioenergy Divisions
India’s NTPC Limited Offers Solar Power Project Management Services To ISA Members
5 Tips to Make Your First Bike Commute to the Office a Successful One
Congress Charges Ahead on Energy Storage: (BEST) Act
First Round of 15 Winners of Reinventing Cities Competition Announced, Creating New Beacons of Sustainable Design & Construction
5 Major UK Businesses Powered by Renewable Energy
Buy An Electric Car And Save The Planet! Not So Fast, Consider The Alternatives First
Why Do Republicans Now Hate On Christian Morals, National Security, Democracy, The US Constitution, The Rule Of Law, The FBI, The CIA, Honesty, & The US Deficit?
Don The Con & Crew Creating Alternative Reality That Is Almost Completely Fake
Nasty Gas Smells In Long Beach Launch AQMD Long-Term Investigation — We’re There, And It’s About Time!
Books, LiteratureHealth 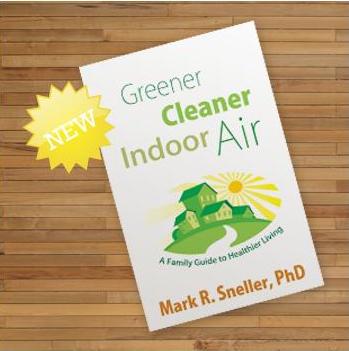 I recently had the chance to interview Dr. Mark Sneller, an expert on the topic of indoor air quality (IAQ) and author of the new book Greener, Cleaner Indoor Air: A Guide to Healthier Living (Wheatmark, 2010). He gave me such in-depth answers on this critical topic that I decided I’d publish them in three parts. Here’s post 2 of 3 (read Part 1 and Part 3 for more). My questions this time were: Has IAQ been getting better or worse over the years and, what don’t we think about when considering IAQ?

The rate of asthma over the past decades has more than doubled worldwide. For a number of years we thought it was due to automobile pollution. Now we know it’s because the indoor air is polluted.

We blamed the tight buildings that were constructed during and after the 1970s for the problem, but this turned out to be a very small part of it. Then we blamed carpeting for our ills. Yes, as pertains to the glues used in industrial carpeting, that is true, when adequate ventilation is not provided and is coupled with worker exposure. There is a shared blame here between the product that is used for glues and the building manager. However, in terms of the IAQ of homes with new carpeting, painted walls give off more nasty gases than do new carpets, and natural floors give off more airborne dust than the average household carpet, if they are not mopped twice weekly.

The real problem is the number of household fragrance products and those products with petroleum distillates and related petrochemicals. Children and pets are the most affected through exposure to petrochemicals, including fragrances, and the behavioral changes have been filmed.

The interested reader is invited to pull out all jars, cans, bottles, and boxes from beneath the kitchen and bathroom sinks, from the laundry room, and from the medicine cabinet and the hall supply closet, if not the garage as well. Put the items outside or on the garage floor or elsewhere and note the following: First, your astonishment of how many individual items there are. Then log the amount spent on them, what is used and not being used (separate grouping), the number with fragrances, and the number that say “contains petroleum distillates.”

Therein lays our problem, to my way of thinking, including the staggering increase in the amount of cancer in developing nations. These products as a whole represent attention deficit disorder, mood swings, loss of learning potential, acting out, some forms of birth defect, and many symptoms that read life a toxic waste dump list. They represent many of the insidious diseases in our world including birth defects.

Indeed, the EPA lists the ingredients in fragrance and perfume products in the same category as pesticides and heavy metals. Get the idea?

These are the products that flood our lives, that we think will do the best job when they cost as much as ten dollars or more a pound when compared with the two dollars a pound for the good clean-and-green products. Virtually all these products can be replaced with baking soda (deodorizer), vinegar (disinfectant), borax (insecticide, herbicide and plant fungicide), and lemon (glass and porcelain cleaners). Cooking oil can be mixed with lemon to make furniture polish.

There are hundreds of uses for these four without fear of exposure.

Mark Sneller was born in Venice, California. After serving for two years in the Peace Corps in India, he went on to earn his Master’s Degree from California State University at Long Beach, and Doctorate from the University of Oklahoma, both in Microbiology/Biochemistry with a specialty in Medical Mycology. In addition, he served two post-doctoral appointments in cancer research and antibiotic research, and also taught graduate studies in Medical Mycology at San Jose State University.

In 1979, Dr. Sneller started Aero-Allergen Research, an indoor air quality company in Tucson, Arizona. Since then, he has received two awards from the Arizona Lung Association for work in the field of respiratory health, has been featured in Newsweek Magazine and The New York Times, and on ABC, NBC and CBS national network news. Dr. Sneller has also been under contract with the Department of Justice and Department of Defense for outdoor and indoor air monitoring and served on the State of Arizona Air Pollution Control Hearing Board under appointment from the governor. A bioterrorism consultant for the City of New York Department of Health, he has hosted his own radio talk show and was a weekly newspaper columnist for ten years. Mark currently has a monthly column on Boomer-living.com.

Dr. Sneller is an approved pollen and mold identification expert by the American Academy of Allergy, Asthma and Immunology and is the author of some fifteen scientific papers in the fields of mycology, palynology, organic chemistry, fungal toxins and combination drug therapy.