If you must postpone a holiday feast, keep it fresh and safe! (Gavin St. Ours, Flickr creative commons). Whatever your menu, you always need to watch out when guests are … [Read full article]

Everyone’s thinking about the U.S. government shutdown. American media have chosen to dramatize a health official’s suggestion that children with cancer will not be able to receive advanced clinical treatments … [Read full article]

A shocking number of bird species are becoming endangered and/or going extinct all over the world. Next to amphibians, our feathered friends — often viewed as agricultural “pests” — are … [Read full article]

We got tens of thousands of views last year on a few posts about mass bird deaths (mostly in Arkansas) and what possibly caused the deaths of these birds. … [Read full article]

Cartoonist’s note: This is not how the conversation went–but a guy can dream.

The Center for Food Safety and Earthjustice have teamed up to file a lawsuit against the USDA for their approval of GM alfalfa.

From the last day or so, other than what we’ve covered, here are some top global warming and environmental politics stories: Monsanto and the USDA, Sittin’ in a Tree, K-I-S-S-I-N-G … [Read full article]

(From our sister site, Red Green and Blue) The US Department of Agriculture continues its unprecedented give-away to big agriculture monster Monsanto and its Genetically Modified (GMO) seeds. On Friday, while … [Read full article] 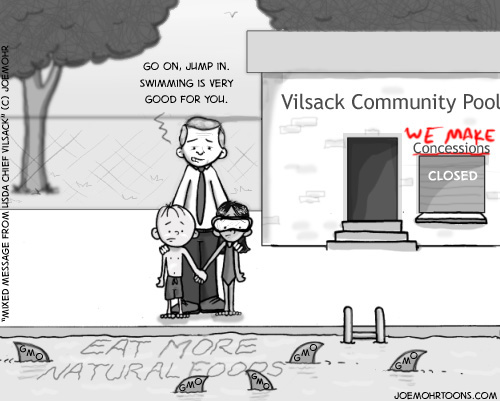 The UN’s Millennium Development Goal of ending global under-nourishment by 2015 will not be met, but a new set of “mega” initiatives are being implemented to achieve more efficient delivery of “research outputs” to speed agricultural development.

Much has been said in opposition to the cap and trade climate legislation that is currently on the Senate’s plate. Opponents have argued repeatedly that the legislation will do nothing but increase the cost of energy, which will force companies send jobs over seas, where labor is cheaper, in order to keep up with production demands. Senator Kit Bond (R-Missouri) even went as far as to call the Waxman-Markey Bill “a pig in a poke.”

Over a hundred conservation, wildlife, and animal welfare groups have sent a letter to incoming Secretary of Agriculture Tom Vilsack urging him to rethink the often cruel practice of “lethal … [Read full article]