We reported recently on the North Pole melting, turning into a bloody freakin’ lake. Well, the often hilarious (if a bit confused) Stephen Colbert recently cracked a number of awesome … [Read full article]

This is insanely hilarious. Why don’t we have more Stephen Colbert’s in the world? I love the whole bit, but the Friends part, the last part (which you just have to watch), the “[Rush] doesn’t believe in global warming? I don’t believe in warming.. I say the science isn’t in on thermodynamics. I believe water boils because it’s scared of fire; it’s trying to jump out of the pot.” You have to watch it: 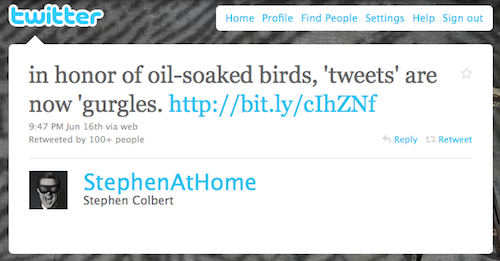 Yes, that sentence doesn’t actually make sense, but if you’re Stephen Colbert it does. Colbert typed the most popular tweet of 2010 in the midst of the BP oil spill … [Read full article]