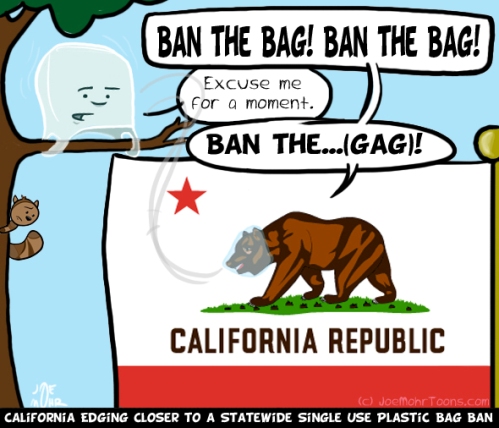 More on Plastic Bags and (Inevitable) Bans From Factory Direct Promos: Will California Become the First State to Officially Ban Single Use Plastic Bags? From ElephantJournal: If You Love Animals, … [Read full article]

More on Plastic Bags Plastic Bag Ban Community Page – Changing The World Together, One Bag at a Time What are the Pros and Cons of Banning Plastic Bags? Life … [Read full article]

Here’s an interesting infographic that a friend of the site passed along. As the title indicates it’s on the life cycle of a plastic bag: Source: Factor Direct Promos

San Francisco activists are trying to catch up to India, where plastic bags have been banned in its largest state and several other places. How? By covering themselves in plastic … [Read full article]

India’s largest state, Rajasthan, has become the latest place to completely ban plastic bags. The ban has been put in place due to “both the short-term and long-term environmental hazards” … [Read full article]

On March 27th 2007, San Francisco became the first city in the US to ban plastic bags in major supermarkets and pharmacies. Only biodegradable plastic and recyclable paper are allowed. Whole Foods recently announced that by April of this year it would end the use of plastic bags in all of its 270 stores in the US, Canada and the UK.

New York and New Jersey require retailers that use plastic bags to offer a recycling program, the city of Oakland, California, is considering a ban, and China announced a countrywide free plastic bag prohibition in January. Ireland took the lead in Europe, taxing plastic bags in 2002. Customers who want them must now pay 33 cents per bag at the register. The Irish government says the tax cut the use of disposable bags by 90 percent! The tax also raised millions of dollars in revenue.