Ever wish you had a planetary time machine that allowed you to see the progression of geological or industrial changes leading up to our present time?…Ever wanted to see how … [Read full article]

on June 22, the Brazilian Bureau of Indian Affairs announced confirmation of a group of uncontacted people living in the western part of the Amazon’s Javari Valley, which is near the border of Peru. The existence of the group of about 200 or so people were confirmed following an over-flight expedition of the region; a series of aerial photographs clearly show several rounded-top huts in small clearings dotting the forested land. Analysis of the photos also showed that the tribe is growing a variety of crops, including corn, bananas, and peanuts. 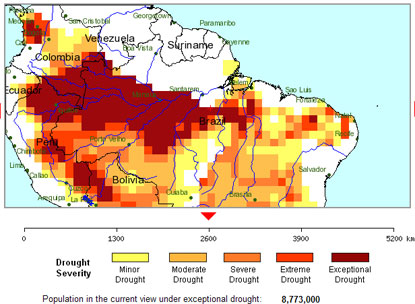 Tremendous droughts in the Amazon are pressing global issues that we’ve covered on here before. 2005 and 2010 saw droughts at a level that have caused serious environmental problems and are wildly outside the norm. See: Dual Amazon Droughts Alarm Scientists or Amazon Gets Hit with Extreme Drought, Perhaps Worst Ever (Global Weirding?) for more on our previous coverage.