The small Indian town of Leh was struck by flash flooding on the night of August 5, 2010, which left 193 dead, hundreds missing, thousands homeless, and caused severe damage … [Read full article]

Heavy monsoon rains over the course of August 2011 have caused widespread flood damage in Pakistan. The southern province of Sindh was hit especially hard. The horrendous flooding has effected close to 5 million people, destroyed millions of homes, killed at least 361 people and displaced 600,000 who are currently living in refugee camps because of the continually rising waters.

Last week, Zach reported on the announcements made by NOAA and NASA concerning the year 2010 and its place in the list of warmest years on record. The statistics placed … [Read full article]

How many times have you heard that climatologists can’t predict climate because weathermen can’t predict the weather. Plenty if you follow the issue like I do. But just as some … [Read full article]

North-Eastern Australia is currently suffering floods which are displacing thousands of people from their homes throughout Queensland and northern New South Wales. The likely culprit for these life-altering floods is … [Read full article]

This is a difficult list to come up with when you cover these topics every day. There are so many big stories, many of which never even hit the mainstream … [Read full article]

Over the past decade, the world has actually warmed more than previously thought, according to a new report out by the Met Office. And as I hinted in a recent … [Read full article]

NASA has reported that January-October 2010 was the hottest January-October on record. It now seems pretty certain 2010 will outpace 1998, which currently ties for fourth hottest year in the NASA … [Read full article]

Get out and vote today if you haven’t done so yet! And while you may be a little disappointed with the politicians in office, and with slow progress getting out … [Read full article]

It’s been a little more than a week since my last Global Weirding News of the Week update, but better late than never… This one is an especially long update, … [Read full article]

America’s winter just passed might be melting in the current heat, but the snow that fell was not affected by climate change or a warming planet. New research published in … [Read full article] 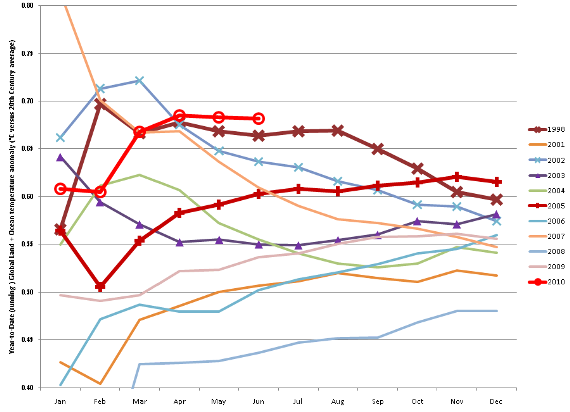 NOAA’s National Climatic Data Center (NCDC) posted its State of the Climate, Global Analysis report for June last week. The news? It was hot, hotter than it should be, hotter … [Read full article]