Skip to content
Loading...
How A Small School In Rural Zambia Will Finally Get Electricity
7 Water And Energy Conservation Strategies For Large Families
How 200 Solar Lights Found Their Way To A Small School In Rural Zambia
Ørsted Consolidates Customer Solutions & Bioenergy Divisions
India’s NTPC Limited Offers Solar Power Project Management Services To ISA Members
5 Tips to Make Your First Bike Commute to the Office a Successful One
Congress Charges Ahead on Energy Storage: (BEST) Act
First Round of 15 Winners of Reinventing Cities Competition Announced, Creating New Beacons of Sustainable Design & Construction
5 Major UK Businesses Powered by Renewable Energy
Buy An Electric Car And Save The Planet! Not So Fast, Consider The Alternatives First
Why Do Republicans Now Hate On Christian Morals, National Security, Democracy, The US Constitution, The Rule Of Law, The FBI, The CIA, Honesty, & The US Deficit?
Don The Con & Crew Creating Alternative Reality That Is Almost Completely Fake
Nasty Gas Smells In Long Beach Launch AQMD Long-Term Investigation — We’re There, And It’s About Time!
BusinessHumorPolicies & Politics 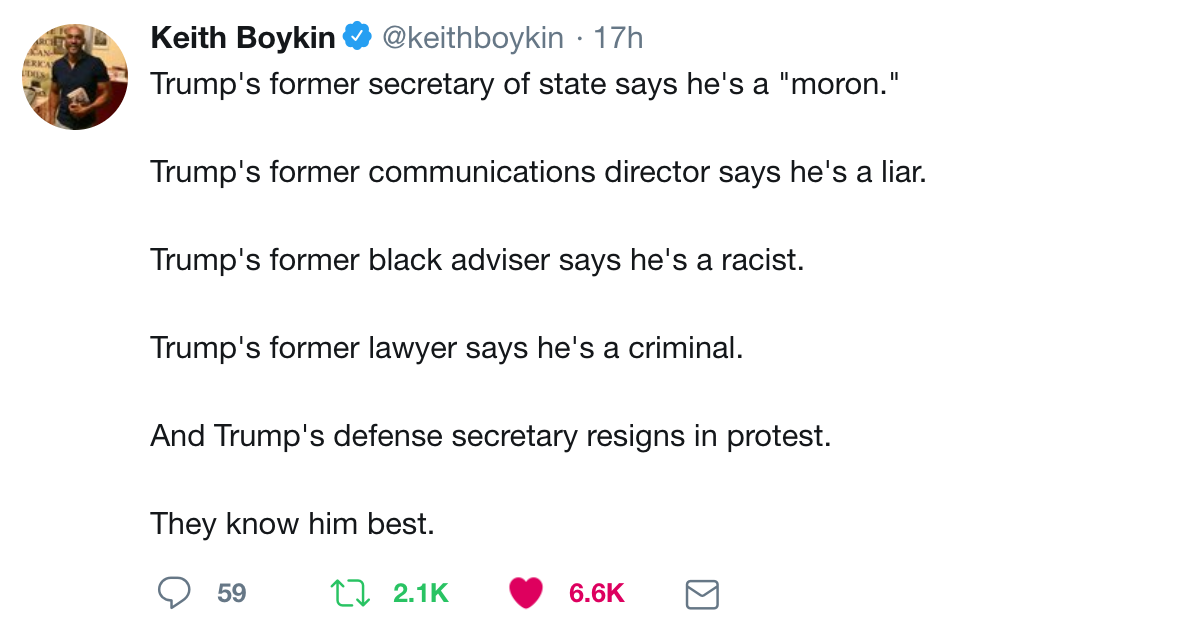 Twitter is a bit annoying — too many trolls and discussions are too shallow. But it is hella fun for political one-liners.

Below are perhaps my 11 favorite political tweets of the past day, each of which are followed by in-depth explanatory two-liners. 😉

They know him best.

Honestly, every freakin’ thing Trump does is the opposite of what he should do, and his own specialized advisers and staff confirm it.

God I fucking hope so https://t.co/dvlGPQQNoO

Well, look at that, a Donald Trump tweet that we can actually agree with. …

It’s from 2014, when we had a fully competent president, but nonetheless.

Indeed, in the letter Mattis wrote, he didn’t say a single positive thing about Trump.

He did imply that Donald Trump was working against the interests of the United States in multiple ways.

"The President is doing everything he can to shut the government down… Does he not care about the American people?" @NancyPelosi pic.twitter.com/1s2t97eKiw

When has Trump ever cared about anyone but himself?

President Trump should be INDICTED!

An indictment would sent a precedent for all future presidents, letting them know that they can't use the office of the presidency to commit crimes and get away with them.

Who's with me on this?

By the way, the dude is a freakin’ criminal!

Don’t forget 7 Republican Senators and one Rep spent the Fourth of July in Russia. They accomplished nothing from that trip. So what were they doing there? Committing treason. Senators Shelby, Daines, Hoeven, Kennedy, Moran, Thune Johnson and Rep. Granger. They should all resign.

Just a friendly reminder that Donald Trump may not be the only Republican a-hole under the thumb of Putin.

BREAKING: Matt Whitaker left 12 companies off his disclosure where he’s still the agent according to IA biz records:

Not sketchy at all.

Not sketchy at all.

One thing we all need to realize: It only gets worse from here. Every day Trump remains in office, more scandals will emerge, and more details on current scandals will be further exposed. The time has come for our country to come together and demand he resign or be impeached.

Hold on to your hats!

.@realDonaldTrump is unfit to be the President. He needs to go.

Well, that would be better, wouldn’t it?

If only Republicans had some sense of duty to the United States.

And just like that, GOP discovers $5.7 billion for a wall.

What if we instead added $5.7B in teacher pay?
Or replacing water pipes?
Or college tuition/prescription refill subsidies?
Or green jobs?

But notice how no one’s asking the GOP how they’re paying for it. https://t.co/jXdm1w9bpy

Ocasio-Cortez, what are you doing bringing sense to a discussion about Republican policy?

Why would Republicans ever implement policies Americans want?

Update: We’ve got a 12th tweet that just has to be added: