Skip to content
Loading...
How A Small School In Rural Zambia Will Finally Get Electricity
7 Water And Energy Conservation Strategies For Large Families
How 200 Solar Lights Found Their Way To A Small School In Rural Zambia
Ørsted Consolidates Customer Solutions & Bioenergy Divisions
India’s NTPC Limited Offers Solar Power Project Management Services To ISA Members
5 Tips to Make Your First Bike Commute to the Office a Successful One
Congress Charges Ahead on Energy Storage: (BEST) Act
First Round of 15 Winners of Reinventing Cities Competition Announced, Creating New Beacons of Sustainable Design & Construction
5 Major UK Businesses Powered by Renewable Energy
Buy An Electric Car And Save The Planet! Not So Fast, Consider The Alternatives First
Why Do Republicans Now Hate On Christian Morals, National Security, Democracy, The US Constitution, The Rule Of Law, The FBI, The CIA, Honesty, & The US Deficit?
Don The Con & Crew Creating Alternative Reality That Is Almost Completely Fake
Nasty Gas Smells In Long Beach Launch AQMD Long-Term Investigation — We’re There, And It’s About Time!
Community & CultureEducationPolicies & Politics

July 11, was World Population Day as defined by the Governing Council of the United Nations Development Programme in 1989, an outgrowth of the interest generated by the Day of Five Billion, which was observed on July 11, 1987.

Family planning is a human right

The current United Nations Population Fund (UNFPA) has a theme of 2018 which is: “Family Planning is a Human Right” and this year marks the 50th anniversary of the 1968 International Conference on Human Rights, where family planning was — for the first time — globally affirmed to be a human right.

Since I saw the late statistician Hans Rosling’s video “Don’t Panic — The Facts About Population” a few years back I have done just that, not panicked, and so I seldom take notice of the speculations that global population numbers should be a problem. However, when my public service national media Danish Radio and Television (DR) — to which all Danes are forced by law to pay a license of $400 per year — produce news that leaves the reader with the notion that population growth is a major problem, I have to react.

I cannot claim that the theme on dr.dk called “Towards 10 billion” is not presenting facts as such, but the narrative irritates me, because IMO it is designed to induce fear. The lack of perspective is staggering. Like the lack of coverage that the global average child birth per woman is now 2.5 and falling. Yes, falling, which means the addition of souls to this planet is stagnating, now!

On and on the theme goes telling us about how to lower the number of child births, like in the story about “African women should give birth to fewer unwanted children“. It is true that the average child births per woman is highest in Africa, about 4 per woman, but it is claimed that the high number of unwanted children is caused by regional culture. Nonsense! It’s called poverty! Oh, and then of course it has something to do with lack of education. Yes, but why is there a lack of education in the first place I wonder? I’ll get back to that.

A short video in these theme articles explain the so-called population problem, and the reason I shout out now is because of one short and very provocative sentence in it: “Research shows that women who get an education and a job automatically give birth to fewer children, because working full time doesn’t give them the time needed to raise many children. ” Oh, so poor women have many children because they have the time on their hands? Are you kidding me?! The video ends with the caption: “Knowledge creates us”…

In the 1960s the worlds population of 3 billion people was divided into 2 groups: rich and poor. Some 1 billion rich and 2 billion poor. Roughly.

In other words the share of the world population that desperately needs to move out of poverty has dropped to around 20% today. That is incredibly good news! It should be easy to get that last 20% out of the dark right? I think it would cost roughly half of one average regional war, say 500 billion dollars. Still, even if it would cost as much as the Iraq war which according to the “Costs of War Project” by the Watson Institute for International Studies at Brown University (via Reuters) cost at least $1.7 trillion, we at least know it’s possible to spend that kind of money. I mean, what’s the cost of one war more or less if it can eradicate world poverty?

So what can we do? Simple. Continue what we do now, but stop being so scared of all those billions. It’s just people, like you and I, trying to make a decent living. When the richest half of the worlds current population reaches a fully renewable energy system in about 2 decades combined with clever cradle-to-cradle ressource management, there will be more than enough for everyone.

Let me give you an example of why things have been going slowly in Africa, and why things are now speeding up (and childbirth going down). Look at this satellite image from Google Maps:

This is Chibwe Basic School in rural Zambia. It is located next to a tarmac main road, the M11, which has power lines going along it. I attended school here in 1981, and I noticed the powerlines back then going along the road which was a dirt road at the time. The school was not hooked up. I revisited the school in 2014 and nothing had changed. The overall condition of the school buildings was still miserable and not hooked up. Power lines where still there, and the road now had tarmac. Bonkers!

After that last visit I created the website linked above in honor of my old school and the good people working there trying to teach kids despite insufficient ressources, and luck would have it a Dutch foundation called Maanda noticed. They where modernizing a nearby school, and now they told me they put Chibwe on the list. If all goes well my old school will be connected to the grid in August this year. Finally!

See the problem? It has nothing to do with ordinary peoples culture or religion or whatever. It all comes down to due diligence, but that won’t work without one single important thing in place: rule of law. You see, the constitution of Zambia has prioritized education of the population since the country’s independence from the british in 1964, but due to corruption and nepotism nothing happens! Here is sporadic extracts of the constitution (my emphasis):

Commit ourselves to upholding the principles of democracy and
good governance … Resolve to ensure that our values relating to family, morality,
patriotism and justice are maintained and all functions of the State
are performed in our common interest … Confirm the equal worth of women and men and their right to freely participate in, determine and build a sustainable political, legal, economic and social order … Education at all levels …

Rule of law is key

The very scary and insightful book “The Locust Effect” by Gary Haugen from International Justice Mission (IJM) makes a very clear point: Investment in rule of law gives the highest return on investment. For most countries in the world, there are constitutions in place that are supposed to secure good governance, but for many they are simply not enforced. In the case of many former African colonies governed by European imperialists, what happened when they achieved their indepence was this: The imperialist administrators were kicked out and the local elite took power. Followed by no real democratic process. These new elitists soon found that this imperialistic system still worked just fine and they enforced the system of corruption and nepotism to maintain power. The result: No development.

Oh, and by the way, the solution is simple: Investing in rule of law simply means to train everyone in the legal system to follow the word of the constitutions already in place in most countries. In fact, the best way to start is to offer police officers a reasonable salary, and corruption is gone. The book “The Locust Effect” has numerous shocking examples and I urge you to watch this TED talk with the author Gary Haugen. It will blow your mind.

No scary numbers to see here

Anyway, lets round of this rant by looking at the data from the United Nations, Department of Economic and Social Affairs, Population Division: 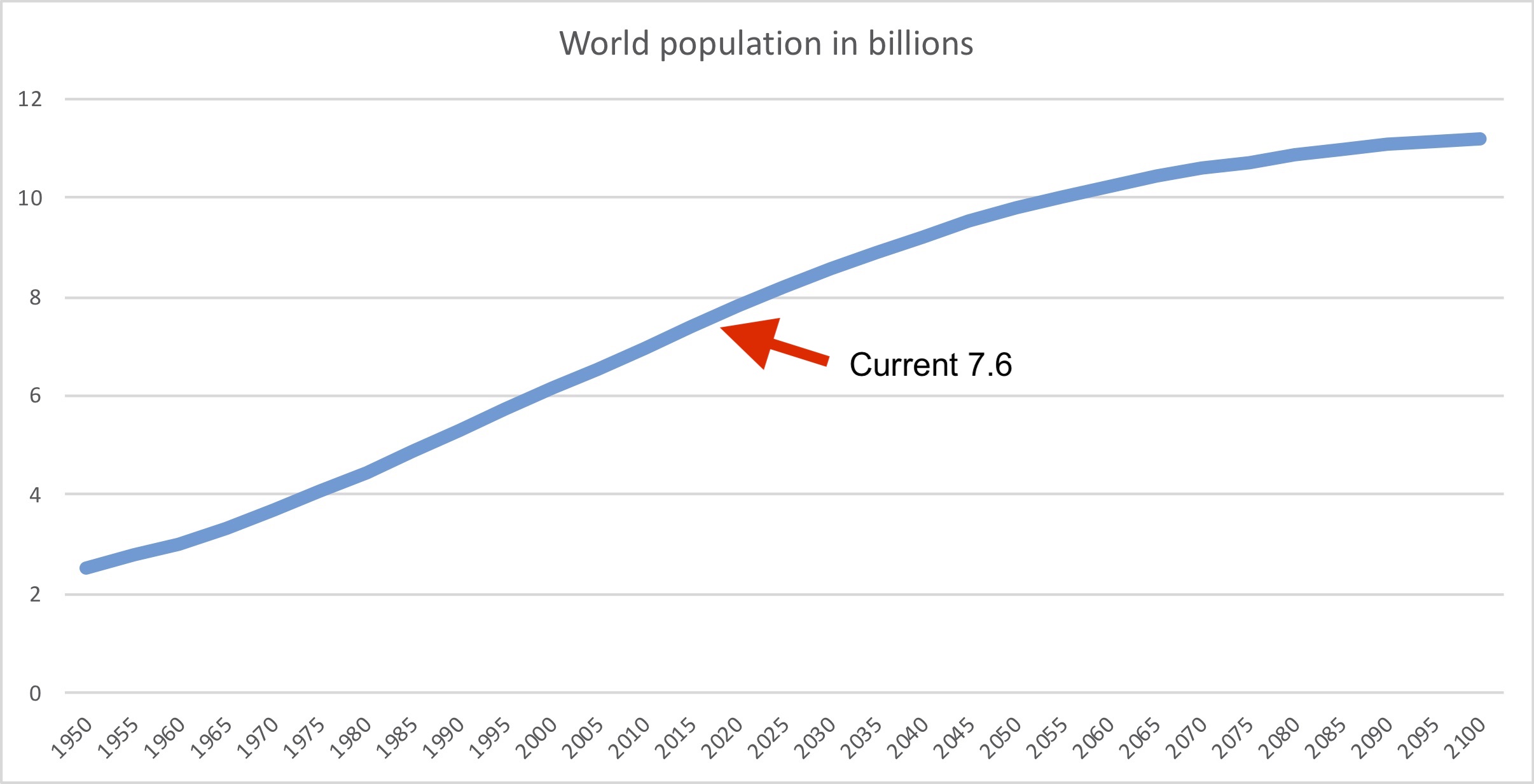 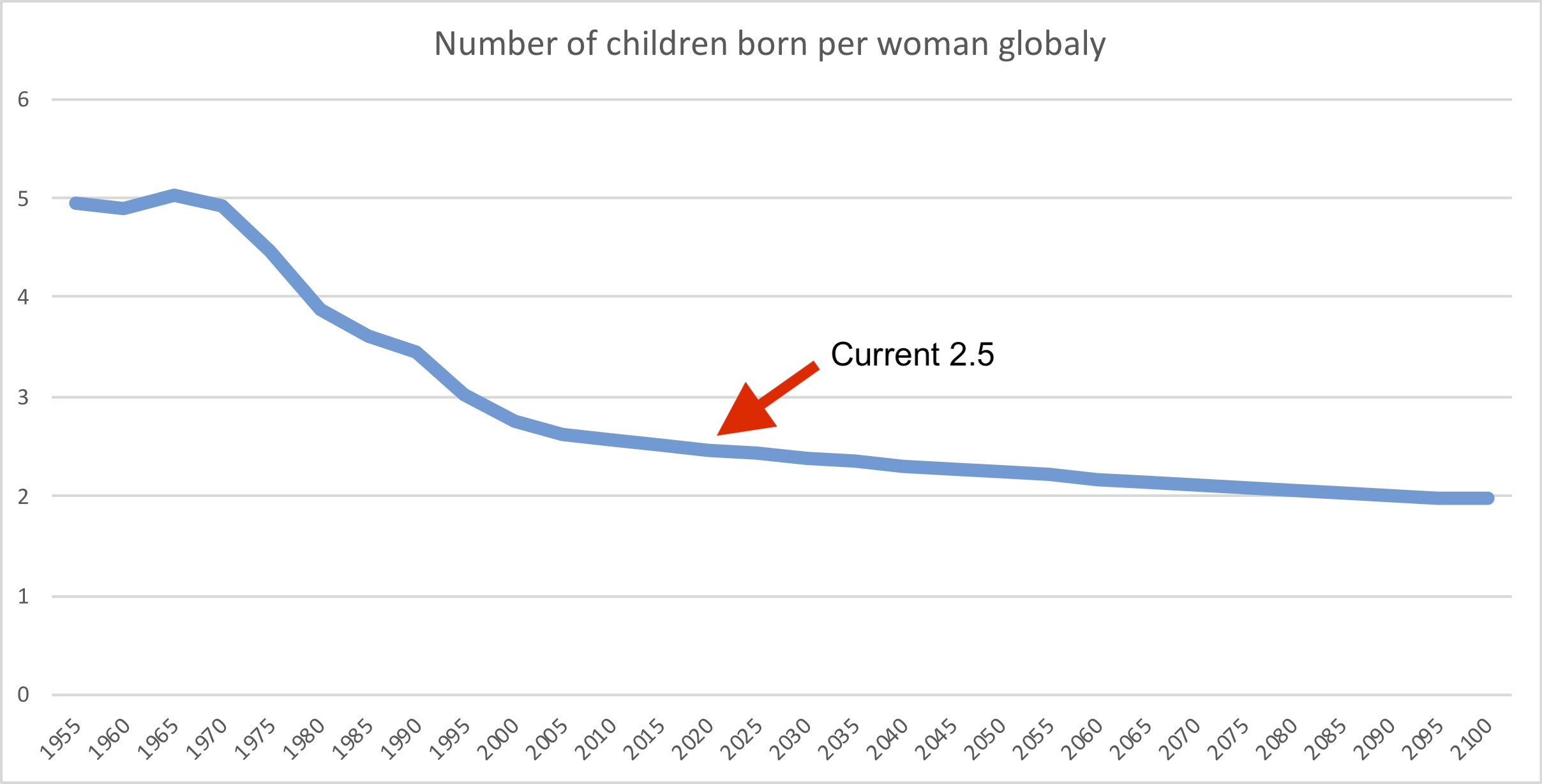 Just look at those graphs and let them sink in. Nothing scary about them. Unless we find the cure of age-induced death itself we will end at around 11 billion souls. If we adjust our use of natural resources cleverly and stop destroying them, we could easily feed 11 billion, or more.

According to the report “World agriculture: towards 2015/2030” from the Food and Agriculture Organization of the UN some 11% of the globe’s land surface is being used for growing crops and an even bigger area is being used for livestock grazing. To produce 1 kg of wheat, between 500 and 4,000 liters of water is needed. Some 15,000 liters of water go into producing 1 kg of beef, while 1 kg of chicken meat necessitates expending about 4,000 liters of water. This is important stuff to think about and frankly, any produce should simply have a price tag that reflect its ecological footprint.

In “Don’t Panic – The Facts About Population” Hans Rosling explains why we have nothing to worry about:

He says: “The advent of 2 child norm families in all cultures is unprecedented in human history”, and nobody seems to realize this. His son Ola Rosling — who continues his fathers work on gapminder.org together with Anna Rosling Rönnlundand — tries to get to the bottom of why we don’t get it in the new book “Factfulness”. In a survey 12,000 people where given simple demographic questions and: “The majority got it wrong — People suffer from an overdramatic world view, they think the world is in a much worse shape than it actually is, which leads to bad decisions and stress”.

So, please, enough with the bad news on global population and let’s just get those governments running smoothly ok?