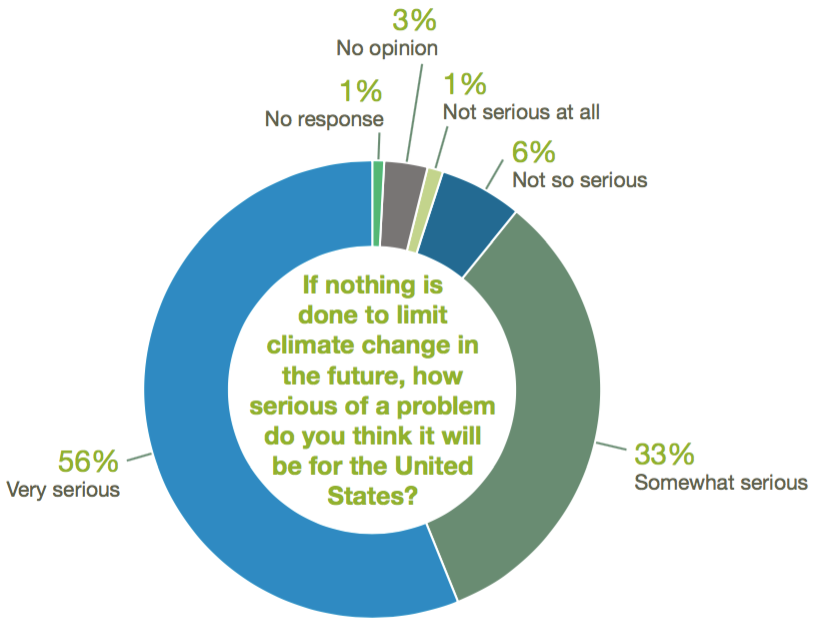 We have all seen the statistics. 97% of climate scientist agree that global warming is happening and is caused by human activity. Donald  Trump and his team of zombie advisers prefer to say that scientist are split on that question but that is clearly a lie they tell themselves to justify their magic realism view of the world. But what do economists have to say? The men and women who devote their lives to “the dismal science” are less concerned with temperature gradients and ice melt statistics than they are with measuring how various factors — including climate change — will impact America’s economic output.

What economists have to say has a great deal of influence on government policy. If the signs indicate a downturn in economic activity, policy makers need to know that so they can take corrective action before the economy slows down and unemployment goes up. A survey of economists by the Institute for Policy Integrity at New York University Law School finds that, as a group, they think climate change will have a greater than expected negative impact on the US economy and that impact will occur sooner than expected.

IPI made an attempt to contact every economist who had published a paper on climate change in leading journals since 1994. It found 1,103 who were still working in the field and reachable and sent them a survey. 365 responded, which is a significant percentage. Similar surveys often produce a response from 5% of those contacted or less.

Statistical research is tricky stuff. The data generated can be influenced by the attitudes of those surveyed. For instance, a telephone poll is affected by the fact that some people refuse to answer pollsters questions while others are happy for a break from their daily routine. But 365 responses is a large enough sample size to suggest the results contain some validity.

The information collected from the economists was reduced to a series of color coded graphs. The first indicates that the great majority of the economists — 89% —  believe if nothing is done to address climate change in the future (the current policy of the Trump administration)  that will have serious consequences for the US economy. That is an important finding. Some economic tools such as the FUND model put that date at 2080. While FUND is one of the top modeling efforts in the field of economics, the vast majority of economists surveyed believe it is far too optimistic. 78% of the economists believe climate change will have serious consequences for the global economy sooner or later. MIT economist Robert Pindyck argues that his colleagues are going about their research into the effects of climate change all wrong. In a recent paper called The Use and Misuse of Models for Climate Policy, he notes that current projections depend almost entirely on the values the modeler chooses to plug in to the research model. To put it bluntly, Pindyck thinks the so called research produced by his peers is little more than opinion dressed up in the guise of science. Pindyck suggests the inputs should be drawn from a broad sample of expert opinion, rather than the opinions of one or two people.

The IPI survey reveals that among economists who conduct research on the impact of climate change on US and global economies, the vast majority agree that alterations in the climate will have serious negative economic impacts. Their research isn’t about climate models but rather economic ones.

The take away is that continuing to fiddle while Rome burns is going to cause businesses and individuals increasingly severe economic hardship — the sorts of hardship that often produce the profound political changes that are anathema to elite sectors of society. That is why the United Stated military considers climate change a serious threat to national security.

In other words, by adopting policies of inaction, the haves are sowing the seeds of their own destruction. Ignoring the impending effects of climate change  or accelerating them through short sighted actions that are willfully delusional imperil us all.