First Parish Unitarians are crying ‘foul’ over a recent denial to allow solar panels on the rooftop of their iconic church in Bedford, Massachusetts. Declaring the Historic District Commission’s (HDC) decision was “legally untenable, unreasonable, arbitrary and capricious,” the congregation has filed a suit against the Town of Bedford.

Specifically pointing to the US Constitution’s First Amendment, as well as Massachusetts’ Declaration of Rights, Article II, the First Parish Unitarians argue that the HDC decision “violated the rights of the members of First Parish to the free exercise of their religious beliefs…”

Congress shall make no law respecting an establishment of religion, or prohibiting the free exercise thereof; or abridging the freedom of speech, or of the press; or the right of the people peaceably to assemble, and to petition the government for a redress of grievances.
–First Amendment of the US Constitution

It is the right as well as the duty of all men in society, publicly, and at stated seasons, to worship the SUPREME BEING, the great creator and preserver of the universe. And no subject shall be hurt, molested, or restrained, in his person, liberty, or estate, for worshipping GOD in the manner and season most agreeable to the dictates of his own conscience; or for his religious profession or sentiments; provided he doth not disturb the public peace, or obstruct others in their religious worship.
–Article II from A Declaration of the Rights of the Inhabitants of the Commonwealth of Massachusetts

Unitarians’ Respect for the Interdependent Web of Existence

The Seventh Principle of Unitarian Universalism declares that Unitarians have “respect for the interdependent web of existence of which we are a part.” This is broadly interpreted as a religious duty to protect Earth’s natural environment. It is exactly this religious duty that Bedford’s Unitarians feel has been denied when the HDC refused their request to install solar panels on their house of worship.

The Bedford Unitarian’s legal complaint reads, “In modern times, adherence to the Seventh Principle has involved confronting and mitigating evolving environmental threats.” It continues, “By far the most pressing of these threats in today’s world is climate change. As such, Unitarian Universalists across the nation believe that their religion necessarily involves taking action on a personal, congregational and community level to confine and mitigate mankind’s role in causing and exacerbating global warming.”

Flying the Flag of Creation Care

With more faith congregations flying the flag of Creation Care, climate action is becoming a popular topic in pulpits of every denomination across the globe. Most famously, Pope Francis’ 2015 comprehensive encyclical on the environment calls for an end to global warming through global action. Muslim leaders from 20 countries published a historic declaration on climate change in 2015, as well.

Divestment from fossil fuels has also been broadly accepted by faith-based groups and organizations all over the world. Interfaith Power and Light (IPL) represents over 18,000 congregations in 40 states engaged in a unified, religious response to global warming. IPL activities include preaching sermons and holding educational events on climate change and promoting faith communities’ roles in building a clean energy future.

A group of progressive clergy sued the state of North Carolina in 2014. They argued that a same-sex marriage ban violated the religious freedom of clergy to uphold a spiritual duty to perform weddings. The case ultimately failed, but the court’s ruling was instrumental in legalizing marriage equality in North Carolina. 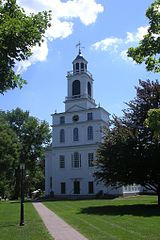 Universalists have a long history of taking a moral stand for important social justice issues. From recent support of marriage equality, all the way back to support for the Abolitionist Movement, Unitarian Universalist congregations have historically offered inspiring examples of religious enlightenment.

Among the Unitarians’ historical leaders, the Unitarian Universalist First Parish in Bedford is one of the earliest congregations in the country, established in 1729.

The current First Parish Meetinghouse was constructed in 1817, designed by American architect Asher Benjamin and built in the Federalist Style.

This beautiful house of worship has been in continuous use by its members since the first day it opened and is today an iconic anchor in Bedford’s Historic District.

Declaring Our Right to a Livable Climate

In November 2015, First Parish Universalists of Bedford passed A Resolution Declaring Our Right to a Livable Climate. The resolution declares:

Therefore, be it resolved, by the First Parish in Bedford, that the congregation:

1. Recognizes that we have an inherent right to a livable climate, and that right trumps laws legitimizing the continued extraction and consumption of fossil fuels.

2. Recognizes the continuation of extraction and burning of fossil fuels as immoral; therefore the construction of new fossil fuel infrastructure is unconscionable.

3. Supports those in our community who through organizing or non­violent civil disobedience seek to reject or dismantle the laws legitimizing this industry.

4. Opposes any tariffs that may be imposed on Massachusetts ratepayers to fund new fossil fuel infrastructure, including the proposed Kinder Morgan and Spectra pipelines.

5. Stands in solidarity with frontline communities in their efforts to oppose fossil fuel infrastructure.

6. Empowers our ministers and elected officials to act in accordance to this resolution in conducting public affairs and speaking on behalf of this congregation.

Historic Preservation vs Freedom of Religion

First Parish applied for permission to install solar panels on its Meetinghouse earlier this year, but the Historic District Commission denied their proposal. According to the Unitarians’ legal complaint, there was no public opposition to the proposal. Even the Bedford Historic Preservation Commission and the Bedford Energy Task Force supported the solar installation.

Now it will be up to a Massachusetts Superior Court to decide if denying solar panels has infringed on the First Parish congregation’s free exercise of religion. Keep an eye out here for an update – this is an important case, possibly setting a precedent for many houses of worship, not just ones in Historic Districts, but in cities and towns all over the nation.