Skip to content
Loading...
How A Small School In Rural Zambia Will Finally Get Electricity
7 Water And Energy Conservation Strategies For Large Families
How 200 Solar Lights Found Their Way To A Small School In Rural Zambia
Ørsted Consolidates Customer Solutions & Bioenergy Divisions
India’s NTPC Limited Offers Solar Power Project Management Services To ISA Members
5 Tips to Make Your First Bike Commute to the Office a Successful One
Congress Charges Ahead on Energy Storage: (BEST) Act
First Round of 15 Winners of Reinventing Cities Competition Announced, Creating New Beacons of Sustainable Design & Construction
5 Major UK Businesses Powered by Renewable Energy
Buy An Electric Car And Save The Planet! Not So Fast, Consider The Alternatives First
Why Do Republicans Now Hate On Christian Morals, National Security, Democracy, The US Constitution, The Rule Of Law, The FBI, The CIA, Honesty, & The US Deficit?
Don The Con & Crew Creating Alternative Reality That Is Almost Completely Fake
Nasty Gas Smells In Long Beach Launch AQMD Long-Term Investigation — We’re There, And It’s About Time!
Community & CultureRenewable EnergySolar EnergySustainability

Interfaith solidarity in Malaysia’s culture is so strong it extends to providing free solar power, “regardless of creed or race.” A recent donation sees a Chinese temple, a Christian church, a Muslim mosque, and a Chinese primary school going solar together in the town of Kota Belud, Sabah.

“With the constant maintenance by Cypark,” stated Datuk Daud Ahmad, these solar panels “can be used for a period of 25 years to come. In addition to helping save electricity, these solar panels will open the eyes of the public, especially school students to find out how this energy is produced.”

The generous solar installation donations were made public at Kota Belud Town Mosque, one of the more famous and stunning landmarks in Malaysia. The Cypark CEO’s announcement was read by Assistant Minister of Agriculture and Food Industry, Datuk Haji Musbah Haji Jamlee, during a Ramadan meal following the breaking of fast at sunset.

The “Going Solar Ceremony” was not the only event of the Ramadan evening. The Kota Belud Mosque also delivered the Muslim’s annual zakat, or charitable giving, in the form of aid and assistance to 260 people in the community and to the Darul Bakti Orphanage Home. 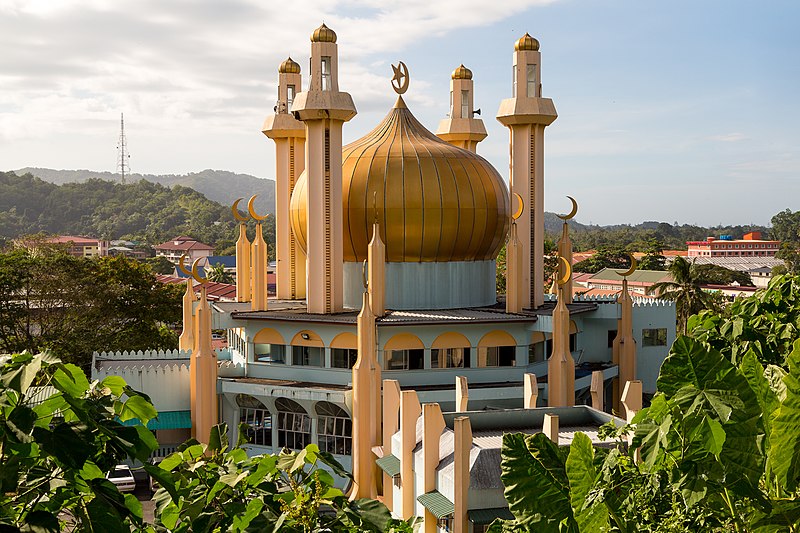 Kota Belud is a sleepy little town in the midst of Sabah, one of two states dividing Borneo, the third largest island in the world. Over 50 percent of Sabah is preserved as protected areas for the conservation of Malaysia’s exotic wildlife. Gibbons, orangutans, pythons, crocodiles, and leopards all roam the lush jungles, and a wealth of marine life swarms the coastal coral reefs.

Every year in October, Kota Belud rouses from its relative calm and hosts the exciting Tamu Besar, or Big Market. Here, Malaysia’s strong sense of interfaith unity really shines as religious diversity is dropped in favor of celebrating the common cultural heritage. The community comes to life, sharing in a beloved celebration colorfully rooted in traditional clothing, handicrafts, and cuisine. A pageant crowning the local Beauty Queens engages everyone, as well as traditional sports events such as the boy’s buffalo races.

The highlight of Kota Belud’s Tamu Besar, however, is the Bajau horsemen, or the “Cowboys of the East.” Both horses and men are dressed in traditional, brightly colored satin costumes and offer many events displaying their famous horseback riding skills.

The Bajau is Sabah’s second largest indigenous group. Originally seafarers, the Bajau transitioned over time from living in boat houses to building houses on stilts near the island’s shore. Some settled further inland, becoming cattle and buffalo farmers, and then included horses and ponies when they were first brought to the island. Becoming known as the “Cowboys of the East,” the Bajau became expert horsemen, using their mounts to help them round up their herds of cattle and buffalo.

Going Solar Together “Regardless of Creed or Race”

From the corporate to the community level, Malaysia embodies the spirit of interfaith unity in an inspiring way. We can all appreciate the efforts, from corporate social responsibility campaigns such as this latest interfaith ‘going solar’ campaign, to community multicultural celebrations promoting interfaith inclusion. As Cypark notes on its website, “we recognise that a balanced enduring approach is needed to ensure sustainability in economic activity, environmental responsibility and social progress. Our commitment to sustainable development is evidenced by what we do.”

The company adds that its goals include helping “to preserve our environment, preventing further degradation to land, water and air with a strong aspiration to help create a sustainable, healthy and economically stable environment for our children and future generations.”

Kota Belud MP Datuk Abdul Rahman Dahlan offered further encouragement at the Mosque’s “Going Solar” Ceremony. Dahlan, who is also the Minister of Urban Well-being and Housing, stated his hopes that other corporations will follow Cypark’s lead, collaborating similarly with Cypark “to install more solar panels in the areas of focus areas throughout the state regardless of creed or race.”