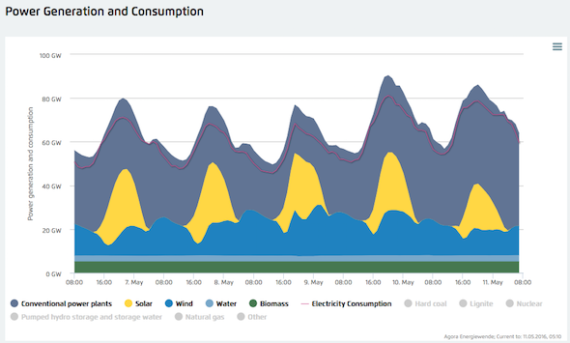 Renewable energy use broke a big record in Europe last weekend. It’s a pretty big deal when a small country like Sri Lanka, Iceland, or Tokelau generates all the power it needs from renewables. When Europe’s #1 economy—Germany, with the fourth largest gross domestic product in the world ($3.7 trillion, exceeded only by the US, China, and Japan)—gets to the point of covering 90% of its power with renewables (55 gigawatts of the 58-GW total), people stand up and take special notice.

Renewable energy has made up the largest sector of Germany’s electricity supply since 2014 (nearly 26% at that time). On Sunday, May 8, 2016, at 11 am local time, total output from German solar, wind, hydropower, and biomass reached this milestone, according to Agora Energiewende, a Berlin-based clean energy think tank. The 2016 number beats last year’s record reading (around 75%) by German renewables. This year’s high actually sent power prices into the negative for several hours. Reduced power demand and ample solar and wind energy accounted for the huge renewable contribution.

“Sunday’s performance highlights the success of the Energiewende, or ‘energy transition,’ Germany’s push to expand clean energy, increase energy efficiency, and democratize power generation. Smart policies [in this country] have opened the renewable energy market to utilities, businesses, and homeowners. As of 2012, individuals owned more than a third of Germany’s renewable energy capacity.”

The Sunday numbers show that wind, solar, and other renewable sources can match the demands of a highly industrialized society, at least on an occasional basis. In fact, as Germany’s economy has grown in recent decades, clean energy use has increased proportionately.

While Germany still gets most of its power from coal, oil, and gas, on average, renewables supply almost a third (30%) of the country’s power. The US, a country four times more populous, lags far behind, with only about 13% of its power coming from renewables. In solar, Germany is ahead of the United States despite its smaller size and dimmer solar resources, which compare to Alaska’s.

“National Geographic says Germany is pioneering ‘an energy revolution that scientists say all nations must one day complete if a climate disaster is to be averted.’ Other countries in the world are also making the switch to renewable energy: Denmark generated 140% of its electricity with wind power last year, and Kauai Island in Hawaii went four consecutive days running uninterrupted for between 5 and 61 minutes on solar power alone, supporting 90% of its energy demands…. Hawaii has written up a law requiring that their energy be 100% renewable by 2045 and California has set their law to hit 50% by 2030.”