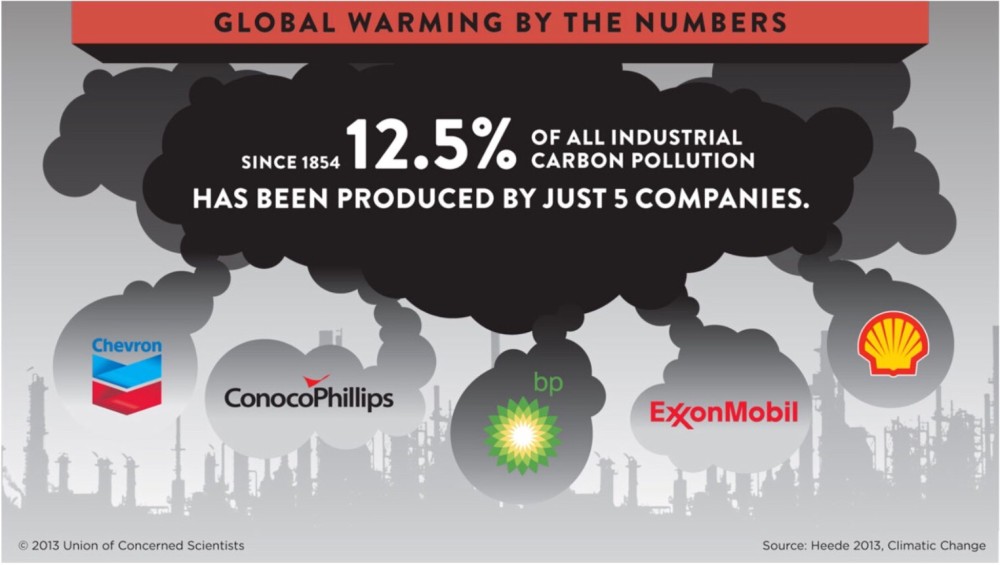 Roughly two-thirds (63%) of all industrial greenhouse gas emissions (carbon dioxide, methane) since the year 1854 are tied to a relatively small group of only 90 entities, according to research from Richard Heede of the Climate Accountability Institute.

The entities in question are/were all involved in fossil fuel extraction and cement production, as one would expect — with 83 of the entities being coal, oil, and natural gas, producers/extractors; and 7 being cement manufacturers. But something interesting revealed by the work — that many may not have expected — is that a substantial majority of the entities in question are still in operation today, despite their roots often being at the dawn of the Industrial Age. The work also revealed that since 1854 around 12.5% of all industrial carbon pollution has come from just 5 companies — Chevron, BP, ExxonMobil, Shell, and ConocoPhillips.

An article on the Union of Concerned Scientists website provides more:

Topping the list of private and state-held companies are Chevron, ExxonMobil, Saudi Aramco, British Petroleum, Gazprom, Shell and the National Iranian Oil Company. These seven companies alone have produced almost one-fifth (18.7%) of all industrial carbon released into the atmosphere since the dawn of the Industrial Revolution.

…You can help determine, for the first time, how the world’s major carbon producers are contributing to the growing consequences of climate change. Simply contribute the spare processing time on your computer and you can help complete the vast amount of computations required to fully document the effects and damages resulting from the actions of major carbon producers. UCS is currently collaborating with top scientists around the world on this ground-breaking research—but we need your help to make it happen.

The infographic below shows the split between the top 20 multinationals, state-owned companies, and government-run companies, clearly.