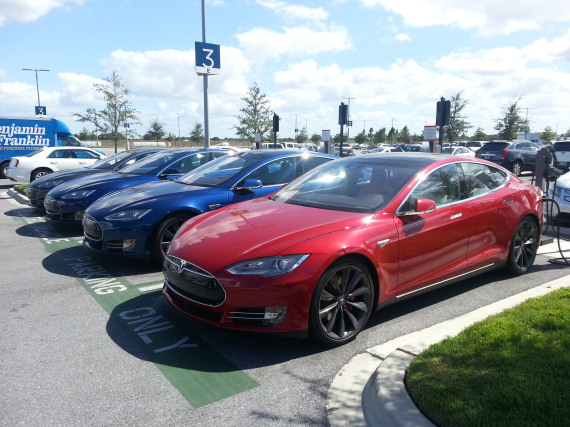 The battle between Tesla Motors and various auto-dealer associations around the country keeps grinding on, with things looking unlikely to resolve completely anytime soon. That said, things have been getting downright strange in some instances….

Case in point: the Virginia Automobile Dealers Association has apparently decided to sue both Tesla and the Virginia State Department of Motor Vehicles over a supposed conspiracy to approve a second Tesla store for the state without the dealers association knowing about it.

Currently there is only a single Tesla store open in Virginia, close to the District of Columbia, in the wealthy neighborhood of Tysons Corners.

The state-by-state battles between electric-car maker Tesla Motors and lobbyists for state auto-dealer interests often take unusual twists and turns. But the situation in the state of Virginia may be among the odder episodes in Tesla’s eight years of selling cars online directly to buyers.

In the Old Dominion state, the auto-dealers’ trade group has sued not only Tesla but the state itself, alleging a conspiracy to ‘hide’ the opening of a second Tesla Store. As related last week in a Reuters article, the Virginia Automobile Dealers Association (VADA) sued both Tesla Motors and the state’s Department of Motor Vehicles.

The suit, filed on March 9, alleges that DMV Richard Holcomb and Tesla are violating the terms of a 2013 agreement that prevents Tesla from opening a second facility in the state until 2017. It says that a hearing was set by Holcomb for March 31 on a request to open a second location — which the dealers’ association learned about only when a member alerted it to a pending real-estate transaction in the city of Richmond.

The president of VADA, Don Hall commented that the DMV and Tesla were trying to get the new store green-lighted “very quickly, in the dark of the night, in hopes that no one could know about it.”

Strange story. One that may have no long-standing effects if the Federal Trade Commission (FTC) ever gets around to dealing with the issue of direct sales, as has been hinted at numerous times. For more information, see: Tesla General Counsel Testifying At January 19 FTC Hearing On Dealership Franchise Laws.