Skip to content
Loading...
How A Small School In Rural Zambia Will Finally Get Electricity
7 Water And Energy Conservation Strategies For Large Families
How 200 Solar Lights Found Their Way To A Small School In Rural Zambia
Ørsted Consolidates Customer Solutions & Bioenergy Divisions
India’s NTPC Limited Offers Solar Power Project Management Services To ISA Members
5 Tips to Make Your First Bike Commute to the Office a Successful One
Congress Charges Ahead on Energy Storage: (BEST) Act
First Round of 15 Winners of Reinventing Cities Competition Announced, Creating New Beacons of Sustainable Design & Construction
5 Major UK Businesses Powered by Renewable Energy
Buy An Electric Car And Save The Planet! Not So Fast, Consider The Alternatives First
Why Do Republicans Now Hate On Christian Morals, National Security, Democracy, The US Constitution, The Rule Of Law, The FBI, The CIA, Honesty, & The US Deficit?
Don The Con & Crew Creating Alternative Reality That Is Almost Completely Fake
Nasty Gas Smells In Long Beach Launch AQMD Long-Term Investigation — We’re There, And It’s About Time!
Climate ChangeDirty Energy & FuelGlobal WarmingTransport & Travel 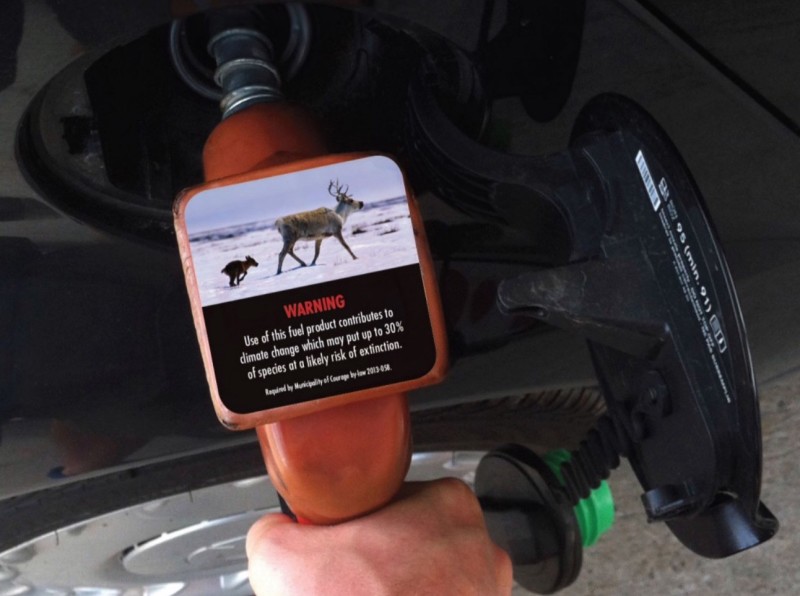 The Canadian city of North Vancouver (in British Columbia) will soon be home to gas pumps featuring climate change warning stickers, following the passing of a law there by the city council, according to recent reports.

While the designs for the warning stickers are yet to finalized, the idea is that they will illustrate some of the possible consequences of greenhouse gas emissions — similar to the long-proposed idea of putting graphic warning images on cigarette packages.

Unsurprisingly, this marks the first time that a city anywhere in the world has decided to follow such a path — and it’s a bit hard to say whether they’ll have any, or much of, an effect at all.

The City Council still has to approve designs for the stickers, but a city staff report recommended including messages such as “Get $5,000 toward a purchase of a new electric car” or “Idling your vehicle for more than 10 seconds wastes more gas than restarting your engine” on the stickers.

The effort to get the stickers on gas pumps is being spearheaded by a Toronto-based group called Our Horizon. Rob Shirkey, executive director of the group, told ThinkProgress that the main point of the stickers isn’t to get people to completely stop driving — it’s to change their way of thinking about climate change.

“(The goal) is not to have someone drop the pump and walk away from the vehicle,” Shirkey stated. “We have a habitual automatic downstream behavior — we don’t think about pumping gas. We all say in Canada, ‘shame on Alberta, shame on tar sands,’ but by pointing finger up-stream, we distance ourselves from the problem. We’re providing most of the demand for that product.”

“The message is that burning fossil fuels causes climate change and … to add a positive spin, here are some tips when using your automobile on how to make it more fuel efficient,” stated North Vancouver Mayor Darrell Mussatto.

The current plan is for the stickers to be implemented next year. Total costs are expected to be around $3,000–5,000 for the initiative.