Skip to content
Loading...
How A Small School In Rural Zambia Will Finally Get Electricity
7 Water And Energy Conservation Strategies For Large Families
How 200 Solar Lights Found Their Way To A Small School In Rural Zambia
Ørsted Consolidates Customer Solutions & Bioenergy Divisions
India’s NTPC Limited Offers Solar Power Project Management Services To ISA Members
5 Tips to Make Your First Bike Commute to the Office a Successful One
Congress Charges Ahead on Energy Storage: (BEST) Act
First Round of 15 Winners of Reinventing Cities Competition Announced, Creating New Beacons of Sustainable Design & Construction
5 Major UK Businesses Powered by Renewable Energy
Buy An Electric Car And Save The Planet! Not So Fast, Consider The Alternatives First
Why Do Republicans Now Hate On Christian Morals, National Security, Democracy, The US Constitution, The Rule Of Law, The FBI, The CIA, Honesty, & The US Deficit?
Don The Con & Crew Creating Alternative Reality That Is Almost Completely Fake
Nasty Gas Smells In Long Beach Launch AQMD Long-Term Investigation — We’re There, And It’s About Time!
Climate ChangeFood 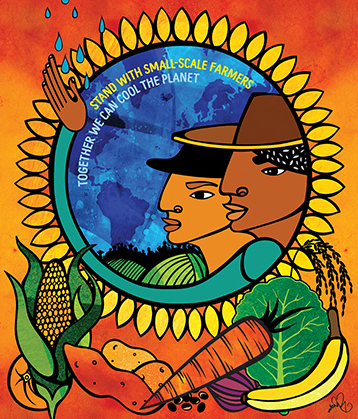 Narrated by Fair World Project’s Political Director Ryan Zinn, the documentary traverses through a series of interviews with activists, farmers, and experts on organic farming, sustainability and food sovereignty. Luminaries like Dr. Vandana Shiva, Rodale Institute’s Mark “Coach” Smallwood, and Ronnie Cummins of the Organic Consumers Association expound on the benefits of agro-ecological practices in the face of climate crisis.

“Climate change is the issue of our generation. Record-breaking heat waves, long-term drought, ‘100-year floods’ in consecutive years, and increasingly extreme super storms are becoming the new normal. While global climate change will impact nearly everyone and everything, the greatest impact is already being felt by farmers and anyone who eats food,” said Ryan Zinn of Fair World Project.

“When we think of climate change and global warming, visions of coal-fired power plants and solar panels come to mind. Policy discussions and personal action usually revolve around hybrid cars, energy-efficient homes and debates about the latest technological solutions. However, the global agriculture system is at the heart of both the problem and the solution.”

“Small-Scale Farmers Cool the Planet” provides a compelling and succinct analysis to better understand the root causes and implications of climate change, as well as a path towards turning back the climate crisis while feeding the planet. As Dr. Vandana Shiva comments in the film, “Too much of the movement to deal with climate change is based on fear. It now needs to move to cultivating hope.”

“Fair World Project is using this video to launch an international and national campaign to educate and engage global citizens and policy makers to invest in regenerative organic agriculture, support and safeguard small-scale farmers at home and abroad and regulate and restrict polluting industrial agriculture,” explains Dana Geffner, Executive Director of Fair World Project. “Addressing the climate crisis starts with transforming our food system with small-scale farmers and regenerative organic agriculture at the center.”

Produced by Fair World Project, the video is a key component to a new educational campaign to raise awareness of agro-ecology and climate change during the month of May 2015 surrounding World Fair Trade Day.

Fair World Project (FWP) is a non-profit organization whose mission is to protect the use of the term “fair trade” in the marketplace, expand markets for authentic fair trade, educate consumers about key issues in trade and agriculture, advocate for policies leading to a just economy, and facilitate collaborative relationships to create true system change.

To view the film in English or in English with Spanish subtitles, go to: http://www.fairworldproject.com/cool.