Skip to content
Loading...
How A Small School In Rural Zambia Will Finally Get Electricity
7 Water And Energy Conservation Strategies For Large Families
How 200 Solar Lights Found Their Way To A Small School In Rural Zambia
Ørsted Consolidates Customer Solutions & Bioenergy Divisions
India’s NTPC Limited Offers Solar Power Project Management Services To ISA Members
5 Tips to Make Your First Bike Commute to the Office a Successful One
Congress Charges Ahead on Energy Storage: (BEST) Act
First Round of 15 Winners of Reinventing Cities Competition Announced, Creating New Beacons of Sustainable Design & Construction
5 Major UK Businesses Powered by Renewable Energy
Buy An Electric Car And Save The Planet! Not So Fast, Consider The Alternatives First
Why Do Republicans Now Hate On Christian Morals, National Security, Democracy, The US Constitution, The Rule Of Law, The FBI, The CIA, Honesty, & The US Deficit?
Don The Con & Crew Creating Alternative Reality That Is Almost Completely Fake
Nasty Gas Smells In Long Beach Launch AQMD Long-Term Investigation — We’re There, And It’s About Time!
Sustainability 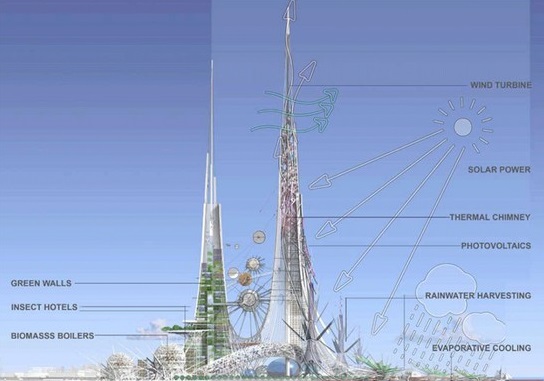 Two of the world’s tallest buildings will purify the environment.

China is home to more cities with a population over 10,000,000 than any other country in the world. It also is the source of some of the worst air pollution. How to build cities for its ever growing population while honoring its commitment to the environment?

The city of Wuhan will soon be home to 2 of the tallest buildings in the world. Known as the Phoenix Towers, they will be constructed on an island in the middle of a 17 acre man made  lake and protrude from the ground like two massive stalagmites.

Designed by London-based Chetwoods Architects in partnership with HuaYan Group, the project is to consist of two buildings, representing the male and female dual aspects of Chinese culture. The taller ‘Feng’ tower will have 100 floors for residential living, offices and retail space and the slightly smaller ‘Huang’ tower will contain what is described as “the world’s tallest garden.” 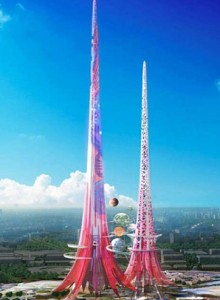 The eco-aspects of the super-skyscraper include a complex mechanical system to simultaneously filter Wuhan’s water, collect solar, wind and hydrogen power, provide produce from a massive vertical garden, harvest rainwater, and boil biomass. In other words, it is intended to become the region’s “lungs,” purifying the air and water around it.

The Phoenix Towers will cost $2.5 billion and are intended to be an eco-tourism destination, with plazas representing different foreign cultures radiating from their bases. A Turkish plaza will have a bazaar-style market. Another plaza will feature Japanese restaurants and shops. A third will include a reproduction of a typical French street.

Chetwoods Architects’ founder Laurie Chetwood said: “In China, if you come up with a slightly mad idea, it’s almost not mad enough. It’s the opposite of the UK. It was blatantly iconic. They wanted to take the Eiffel Tower experience on a stage further. It doesn’t just stand there and become an iconic symbol of Wuhan. It has to do a job. We’ve applied as many environmental ideas as we possibly could to justify the shape and the size of them.”

Will the Phoenix Towers influence urban design elsewhere? Certainly they will affect how other designers incorporate environmentally friendly, sustainable design into the cities of the future.