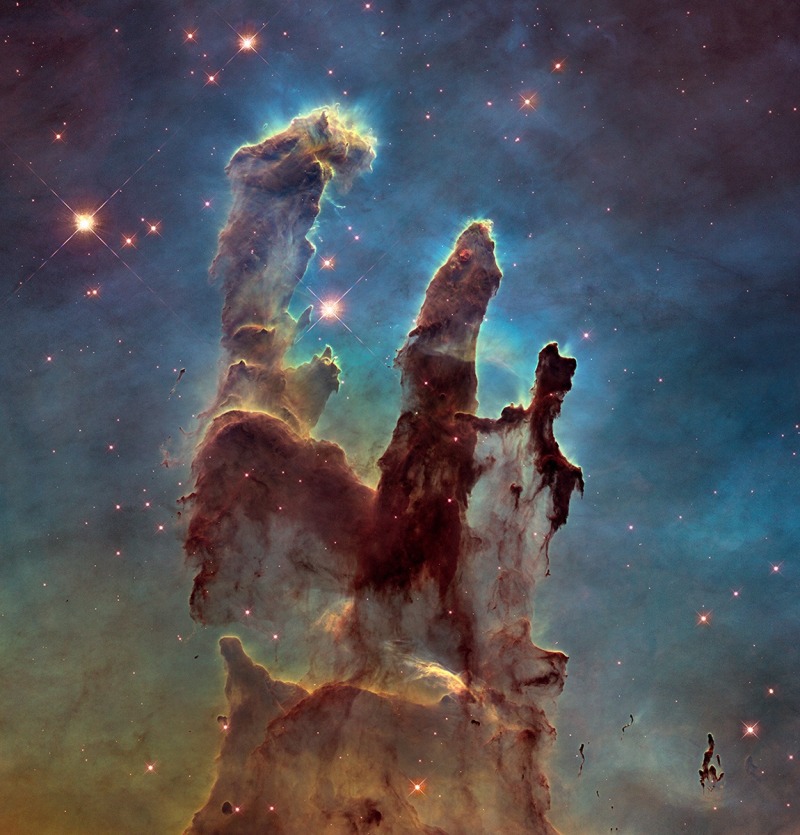 The iconic Pillars of Creation recently had their portrait retaken by NASA’s Hubble Space Telescope in high-def as part of the telescope’s 25th anniversary celebration. The new image — showing the trio of giant columns of gas illuminated by the light of massive stars next to the Eagle Nebula (M16) in def — is as striking as ever, this time though the image includes the infrared spectrum as well. Owing to the inclusion of the infrared spectrum in the new image, further details are now visible, as infrared light can penetrate through all but the densest portion of the dust and gas cloud, whereas visible light can not.

Amongst these new details, are the now visible hints of newborn stars inside some of the pillars. Despite these newly visible stars, some astronomers have noted that the Pillars of Creation would probably more aptly be referred to as “pillars of destruction”.

“I’m impressed by how transitory these structures are. They are actively being ablated away before our very eyes. The ghostly bluish haze around the dense edges of the pillars is material getting heated up and evaporating away into space. We have caught these pillars at a very unique and short-lived moment in their evolution,” stated Paul Scowen of Arizona State University in Tempe, one of the main astronomers involved in the original Hubble observations of the Eagle Nebula.

“These pillars represent a very dynamic, active process,” Scowen continued. “The gas is not being passively heated up and gently wafting away into space. The gaseous pillars are actually getting ionized (a process by which electrons are stripped off of atoms) and heated up by radiation from the massive stars. And then they are being eroded by the stars’ strong winds (barrage of charged particles), which are sandblasting away the tops of these pillars.”

Something interesting to note — when the 1995 and 2014 images are compared against each other, it’s clear that there’s been “a lengthening of a narrow jet-like feature that may have been ejected from a newly forming star”. In just these last 19 years this “jet” has “traveled” the equivalent of an additional 60 billion miles — at an estimated speed of 450,000 miles an hour.

Something else interesting to note is the apparent similarities between the pillars and what is theorized about our the formation of our own solar system — there’s evidence that “the forming solar system was seasoned with radioactive shrapnel from a nearby supernova. That means that our Sun was formed as part of a cluster that included stars massive enough to produce powerful ionizing radiation, such as is seen in the Eagle Nebula”.

“That’s the only way the nebula from which the Sun was born could have been exposed to a supernova that quickly, in the short period of time that represents, because supernovae only come from massive stars, and those stars only live a few tens of millions of years,” Scowen noted. “What that means is when you look at the environment of the Eagle Nebula or other star-forming regions, you’re looking at exactly the kind of nascent environment that our Sun formed in.”

Those interested in giving the pillars a visit will be happy to know that they’re “only” 6500 light years away. 🙂

Those interested in getting very high-resolution versions of the image can find them here.

Here’s the 1995 version for a comparison: