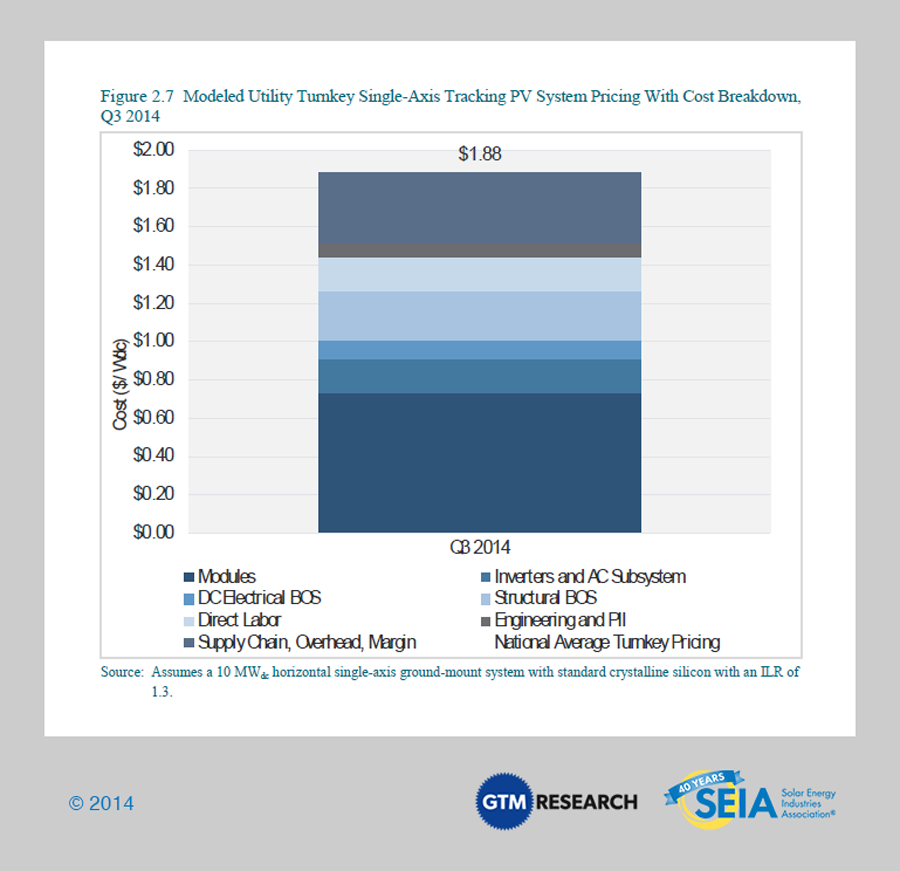 The SEIA/GTM Research US Solar Market Insight™ report for the 3rd quarter was released today. Over on CleanTechnica, Josh covered the continued growth of the US solar power market. In this article, I want to quickly run down the pricing side of things. The short story is that solar prices continue to fall in the US. “Best-in-class installers are achieving lower costs by leaning on high installation volumes that allow the purchase of hardware directly from manufacturers and by amortizing overhead costs over a larger installation base,” SEIA adds.

“Supply chain, customer acquisition, installation labor, overhead and margin, which together constitute the category of ‘soft costs,’ continue to dominate project costs. Customer acquisition costs continue to be a pain point for small and large system installers alike. While smaller installers typically have lower-cost leads – leaning heavily on referrals – gaining significant volumes can be difficult. In contrast, larger installers receive many more qualified leads, but often procure these leads at higher costs (e.g., purchased third-party leads). Data from publicly listed companies and private communications to GTM Research both indicate that customer acquisition costs are typically anywhere between $0.35/Wdc and $0.50/Wdc, with little correlation between the size of the firm and the level of costs.”

Bringing down those soft costs has been a strong focus of the US Department of Energy and a number of solar startups, as well as the large solar players. I imagine we’ll keep seeing a gradual decline in those costs, but it would be nice if we somehow made a quick jump down. Unfortunately, with the distributed nature of solar permitting and the overall US solar market, I don’t think there’s a silver-bullet way to get to Germany’s or Australia’s soft cost level. Market maturity is what’s needed, and all of what that entails. “Major cost declines come from inverter and structural BOS pricing – both challenged industries as commoditization continues to compress margins. The potential for module pricing increases as the result of tariffs on Chinese and Taiwanese module products has also led to system developers and EPCs aggressively pushing inverter and racking manufacturers to adopt lower prices.”

SEIA and GTM Research don’t have as much information on pricing of utility solar systems, but based on the publicly available data and info from utility developers and EPCs that they use, “weighted-average system pricing for utility systems in Q3 2014 came in at $1.88/Wdc, a 3.8% increase from Q2 2014, reflecting a higher proportion of systems installed in higher-cost regions and an increase of single-axis tracking systems.” Of course, with all of these solar power systems, the price per watt doesn’t provide the full picture when it comes to cost-competitiveness. The solar resources in the area of the project, the solar incentives, the quality and efficiency of the solar PV systems, the price of competing electricity sources, and other factors provide the estimated levelized cost of electricity (LCOE) and how it compares to the competition. The actual $/kilowatt-hour is what’s really going to matter to the customer.

SEIA & GTM Research also take a look at the solar PV component costs. Here’s a snapshot breakdown showing the evolution of those prices over the past year and a quarter: Here’s some commentary from SEIA on this side of the US solar industry:

Pricing for polysilicon and PV components fell quarter-over-quarter in the third quarter of 2014. Polysilicon price adjustments were slight as polysilicon demand remained strong, prices falling only 1% sequentially to $21.70/kg. In contrast, demand for wafers fell during the quarter, driving prices down 4% to $0.22/Wdc. However, the most dramatic drop was the decline in Taiwanese cell spot prices. Following the U.S. imposition of antidumping duties on Taiwanese cells and modules, Taiwanese cell spot prices plummeted from $0.44/Wdc in Q2 to $0.34/Wdc in Q3. Since duties spanned from 20.86% to 27.59%, final prices in the U.S. hovered around $0.41/Wdc in Q3.

Module pricing in the U.S. differs widely based on order volume, producer region and individual firm. During the third quarter, delivered prices for Chinese modules ranged from $0.72/Wdc on the low side (corresponding to order volumes greater than 10 MWdc for less established firms) to $0.75/W on the high side (established, bankable firms, order volumes of less than 1 MWdc). Blended delivered pricing for Chinese modules is estimated to have stayed flat at $0.73/W for the third straight quarter, up 4% from Q3 last year. Pricing by firms in the U.S. and other Asian countries (Korea, Malaysia, Singapore) selling into the residential and commercial sector were in the range of low to mid $0.80/Wdc, largely in sync with price levels throughout the year.

For more, check out Josh’s US solar installation rundown, SEIA’s full summary, the entire report if it’s in your budget, and our upcoming piece on the US solar PV pipeline and leading solar states.