Skip to content
Loading...
How A Small School In Rural Zambia Will Finally Get Electricity
7 Water And Energy Conservation Strategies For Large Families
How 200 Solar Lights Found Their Way To A Small School In Rural Zambia
Ørsted Consolidates Customer Solutions & Bioenergy Divisions
India’s NTPC Limited Offers Solar Power Project Management Services To ISA Members
5 Tips to Make Your First Bike Commute to the Office a Successful One
Congress Charges Ahead on Energy Storage: (BEST) Act
First Round of 15 Winners of Reinventing Cities Competition Announced, Creating New Beacons of Sustainable Design & Construction
5 Major UK Businesses Powered by Renewable Energy
Buy An Electric Car And Save The Planet! Not So Fast, Consider The Alternatives First
Why Do Republicans Now Hate On Christian Morals, National Security, Democracy, The US Constitution, The Rule Of Law, The FBI, The CIA, Honesty, & The US Deficit?
Don The Con & Crew Creating Alternative Reality That Is Almost Completely Fake
Nasty Gas Smells In Long Beach Launch AQMD Long-Term Investigation — We’re There, And It’s About Time!
Climate ChangePolicies & Politics

(BREAKING–Reposted from our sister site, CleanTechnica)

We’ve thought for a while that the US had more leadership to contribute to the world climate process, so today’s news (still on the gossip vine at present) that President Obama has a $3 billion pledge in his pocket for the Global Climate Fund is not a total surprise. Growing out of a 2010 agreement made by the international community in Copenhagen, this mechanism allows developed nations and the private sector to capitalize climate change mitigation and adaptation in the world’s developing countries. 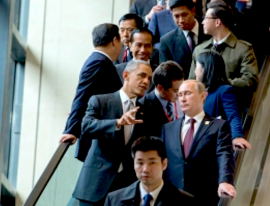 The Global Climate Fund is crucial in terms of fairness because it guarantees that developing nations will not be penalized for sacrificing their individual progress to urgent world needs. The US contribution will bring the fund to $6 billion of the $10 billion proposed for the end of 2014. Earlier pledges have been made by Germany ($1 billion), France ($1 billion), and Sweden ($500 million).

The US pledge could not come at a more opportune time. It immediately precedes the meeting of the prestigious G20 Summit—a periodic huddle of the world’s largest economies—that is taking place in Brisbane this weekend. It will very likely mobilize the slower nations of the world to complete and perhaps exceed the fund’s target for this year.

The move is nothing new to the US. It follows in the tradition of President George W. Bush’s $2 billion commitment to the Climate Investment Funds and his subsequent investment of $430 million in the important Global Environment Facility.

Last week, Senators Barbara Boxer (CA), Ron Wyden (OR), Robert Menendez (NJ), and Patty Murray (WA) pointed out in a letter to President Obama that “a substantial pledge to the GCF is [vital]… and may well be a necessary prerequisite for any future international agreement on climate change.”

Look for this Global Climate Fund pledge to signal hope for the future in terms of climate change and adaptation. It has the potential to galvanize the international picture, lead up to a much stronger UN summit in Lima in several weeks (which will be reported live from Peru on this blog and cleantechnica), and help us find a way out of the accelerating tangles of climate change. It may be the very best chance we all have left.