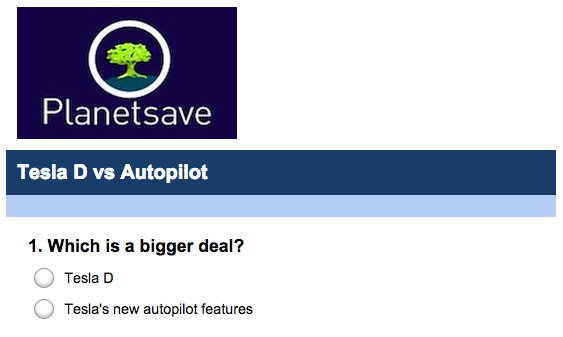 Tesla Motors just made two huge auto announcements. The company paired them together, making them seem like one, but they are actually two separate things. The question I have, which is bigger for society as a whole?

Tesla last week unveiled “Tesla D,” which is actually an all-wheel drive version of the Tesla Model S (Dual Motor Model S). The upgrade results in more speed (the quickest production 4-door sedan in history) as well as more range. That link above introduces how that works, but a subsequent Tesla Motors blog post provides a little more info. The bottom line, however, is that the Tesla Model S P85D can go from 0 to 60 mph in 3.2 seconds and gets 10 more miles of range while improving traction and control. “With its digital torque controls and low center of gravity, Dual Motor Model S has the most capable road holding and handling of any vehicle ever produced,” Tesla writes. And the Tesla P85D is actually faster than the McLaren F1!

You can now order a Dual Motor Model S online. Tesla Model S P85D deliveries will begin in December (in North America), followed by 85D and 60D deliveries in February.

Here’s a very excited reaction to the speed:

Alongside the Model D announcement was another big announcement, this one regarding autopilot driving features. On the hardware side, this includes “a forward radar, 12 long range ultrasonic sensors positioned to sense 16 feet around the car in every direction at all speeds, a forward looking camera, and a high precision, digitally controlled electric assist braking system.” The difference with these upgrades (unlike the Model D upgrade) is that they are standard, going out on all new Tesla cars rolling out of the factory. With this hardware and corresponding software, Tesla cars will be able to keep themselves in their lanes, read road signs and adjust speed accordingly, change lanes simply with the prompt of you turning on the turn signal (it will wait until the coast is clear to change lanes), and use cruise control based on surrounding traffic.

“Tesla’s Autopilot is a way to relieve drivers of the most boring and potentially dangerous aspects of road travel – but the driver is still responsible for, and ultimately in control of, the car,” Tesla clarifies.

Nonetheless, these are some pretty big steps toward autonomous driving or self-driving cars.

These guys like the speed, but they are much more impressed by the autopilot features:

Tesla D or Autopilot — Which Is Bigger?

The speed of the Tesla Model S P85D is insane, as I initially worded it (before finding out that Tesla CEO, Chairman, and Chief Product Architect Elon Musk used the same term), but I’m inclined to think that the autopilot features are a much bigger deal for society as a whole.

First of all, not that many people really care  about a 1-second difference going from 0 to 60 mph. Yes, car enthusiasts, like those probably reading this post, are amazed by it. Not only is that super fast, that’s from a car that seats up to 7 people! But most people wouldn’t notice the difference and won’t really care.

The autopilot features, on the other hand, make driving much more comfortable and less stressful for basically everyone. Almost everyone (barring those who really hate change or have control issues) would appreciate and benefit from these features.

Secondly, the autopilot features actually make driving safer, cutting down on accidents, horrible injuries, death, public services costs (police, ambulance, roadway), and time wasted. Those are big benefits. Going from 0 to 60 mph in 3.2 seconds is unlikely to have any broad societal benefits. Actually, it could even lead to accidents from careless speed demons. Well… I take that back: the attention Tesla is getting for this insane acceleration could very well encourage more people to look at, test drive, and buy electric cars — Tesla cars or other electrics. That could result in some big societal benefits. But, for that matter, the autopilot features could have just as strong of an effect. It’s really unclear which would attract more people to Tesla and electric cars, and it always will be.

Also, if we are talking about the benefits of the D, the improved traction control and handling should also be included. Yes, those will result in safer driving… but those only come with the higher-end D models that a smaller number of drivers will buy, and I still don’t think they compare to the safety benefits from the autopilot features.