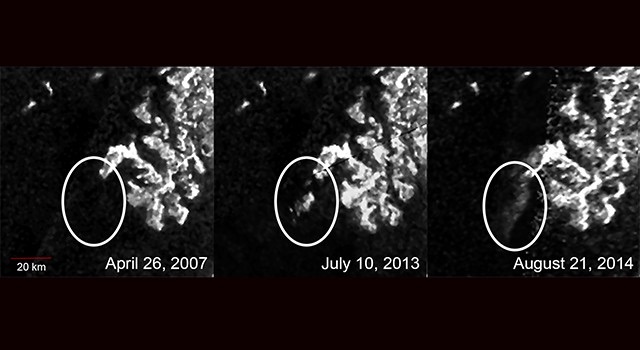 A rather strange-looking “feature” was recently observed forming, and changing, in the hydrocarbon seas of Saturn’s moon Titan by NASA’s Cassini spacecraft.

The interesting feature covers an area of over 100 square miles (260 square kilometers) in Ligeia Mare — one of the biggest seas on Titan. Cassini has now observed the feature twice, with significant changes having (apparently) occurred in between the two observations.

Those interested can take a look at the feature here.

The mysterious feature, which appears bright in radar images against the dark background of the liquid sea, was first spotted during Cassini’s July 2013 Titan flyby. Previous observations showed no sign of bright features in that part of Ligeia Mare. Scientists were perplexed to find the feature had vanished when they looked again, over several months, with low-resolution radar and Cassini’s infrared imager. This led some team members to suggest it might have been a transient feature. But during Cassini’s flyby on August 21, 2014, the feature was again visible, and its appearance had changed during the 11 months since it was last seen.

Scientists on the radar team are confident that the feature is not an artifact, or flaw, in their data, which would have been one of the simplest explanations. They also do not see evidence that its appearance results from evaporation in the sea, as the overall shoreline of Ligeia Mare has not changed noticeably.

The possible explanations put forward by the researchers include: waves, rising bubbles (think arctic methane releases), some sort of floating objects, something suspended just below the surface of the sea, or maybe, perhaps, a Loch Ness monster, or a “whale”?

Other explanations include something related to seasonal changes on the moon, or interactions with other moons.

“Science loves a mystery, and with this enigmatic feature, we have a thrilling example of ongoing change on Titan,” said Stephen Wall, the deputy team lead of Cassini’s radar team, based at NASA’s Jet Propulsion Laboratory in Pasadena, California. “We’re hopeful that we’ll be able to continue watching the changes unfold and gain insights about what’s going on in that alien sea.”