Skip to content
Loading...
How A Small School In Rural Zambia Will Finally Get Electricity
7 Water And Energy Conservation Strategies For Large Families
How 200 Solar Lights Found Their Way To A Small School In Rural Zambia
Ørsted Consolidates Customer Solutions & Bioenergy Divisions
India’s NTPC Limited Offers Solar Power Project Management Services To ISA Members
5 Tips to Make Your First Bike Commute to the Office a Successful One
Congress Charges Ahead on Energy Storage: (BEST) Act
First Round of 15 Winners of Reinventing Cities Competition Announced, Creating New Beacons of Sustainable Design & Construction
5 Major UK Businesses Powered by Renewable Energy
Buy An Electric Car And Save The Planet! Not So Fast, Consider The Alternatives First
Why Do Republicans Now Hate On Christian Morals, National Security, Democracy, The US Constitution, The Rule Of Law, The FBI, The CIA, Honesty, & The US Deficit?
Don The Con & Crew Creating Alternative Reality That Is Almost Completely Fake
Nasty Gas Smells In Long Beach Launch AQMD Long-Term Investigation — We’re There, And It’s About Time!
ActivismBusinessCommunity & CultureDirty Energy & FuelGreen Your LifePolicies & PoliticsRenewable EnergySolar Energy

We’re trying to get more solar energy stories going here on Planetsave. To catch readers up, I’m doing a short series on the top 50 solar energy stories of 2013 so far. Learning from the Top 33 EV Stories article I recently published, I’m splitting this one into 5 posts. Otherwise, the page would take forever to load. Plus, it’s easier to swallow 10 at a time.

It’s pretty hard to actually rank these top 50 articles, so I didn’t even try. The list is in no particular order. The numbers are basically just for referring people (your friends, family, coworkers, etc) to specific stories you think are worth highlighting. Don’t forget to do that! Once the posts are up, I will add links here:

New Jersey, the first or second best state in the country for solar power per capita, this year passed the 1,000 megawatt (1 gigawatt) solar power capacity milestone. And it has just approved funding for another 100 MW.

32. Solar Cooperative Gets Panels On 1 In 10 Roofs In Neighborhood Of DC

From the article linked above: “What began as a group of neighbors hoping to reduce their impact on global warming has since become a major force for solar advocacy in Washington, DC. The Mount Pleasant Solar Cooperative was started by two teenage boys who wanted to make solar power convenient and affordable through a bulk-purchase program. Along the way, the cooperatives new members realized that buying power wasn’t enough, and sought out changes in the district’s energy policies.” The neighborhood this year reached over 10% solar roofs! Imagine if such initiatives got going around the country. Maybe it’s time to start one in your neighborhood?

In the spring, Brazil saw a surge of nearly 400 MW worth of solar power project applications in just one week. This followed early surges totaling 1,300 MW. The country is also working on several solar-powered stadiums for the 2014 FIFA World Cup, the first of which (capped with 1,500 solar panels) was just opened.

A new study by the Reiner Lemoine Institut and Solarpraxis AG has found that solar and wind power generation complement each other better than previously thought, much better.

The western Indian state of Rajasthan recently became the second state to have an operational solar power capacity of over 500 MW. Last year, another western state, Gujarat, achieved this milestone with its aggressive solar power policy.

The US solar industry is now over 119,000 solar jobs strong. Those jobs are being mapped in very cool ways here.

38. 12-Year-Old Girl Building Her Own Solar-Powered House — What’s Your Excuse?

From the article: “A 12-year-old student, inspired by the documentary We, the Tiny House People, is currently in the process of building her own 128 square-foot, entirely solar-powered home (featuring a 30-foot loft). With someone as young as that building her own energy-independent home, it begs the question, Why am I not doing that?” 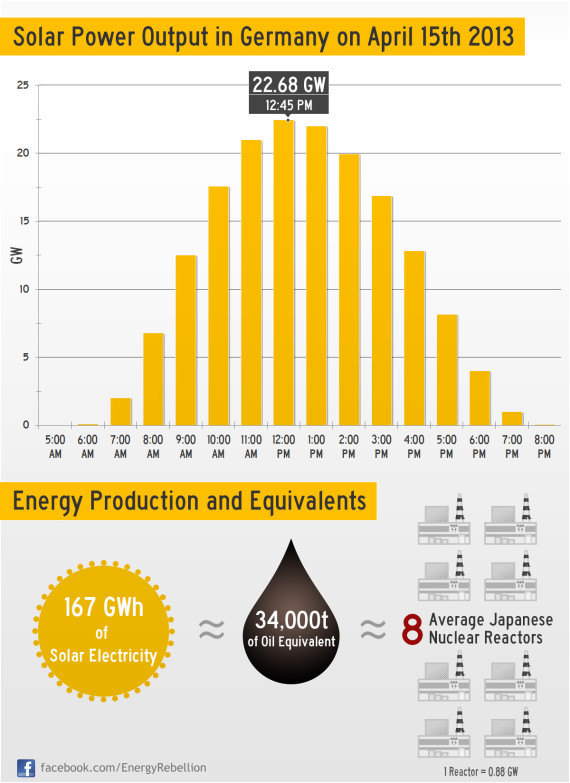 Germany has been setting solar record after solar record. On April 15 it set another peak power solar output record of 22.68 GW. And in 2012 it set a solar PV installation record of 7.6 GW.

250 MW is huge. Unsubsidized is huge. Congratulations to Spain!