Skip to content
Loading...
How A Small School In Rural Zambia Will Finally Get Electricity
7 Water And Energy Conservation Strategies For Large Families
How 200 Solar Lights Found Their Way To A Small School In Rural Zambia
Ørsted Consolidates Customer Solutions & Bioenergy Divisions
India’s NTPC Limited Offers Solar Power Project Management Services To ISA Members
5 Tips to Make Your First Bike Commute to the Office a Successful One
Congress Charges Ahead on Energy Storage: (BEST) Act
First Round of 15 Winners of Reinventing Cities Competition Announced, Creating New Beacons of Sustainable Design & Construction
5 Major UK Businesses Powered by Renewable Energy
Buy An Electric Car And Save The Planet! Not So Fast, Consider The Alternatives First
Why Do Republicans Now Hate On Christian Morals, National Security, Democracy, The US Constitution, The Rule Of Law, The FBI, The CIA, Honesty, & The US Deficit?
Don The Con & Crew Creating Alternative Reality That Is Almost Completely Fake
Nasty Gas Smells In Long Beach Launch AQMD Long-Term Investigation — We’re There, And It’s About Time!
SpaceUncategorized 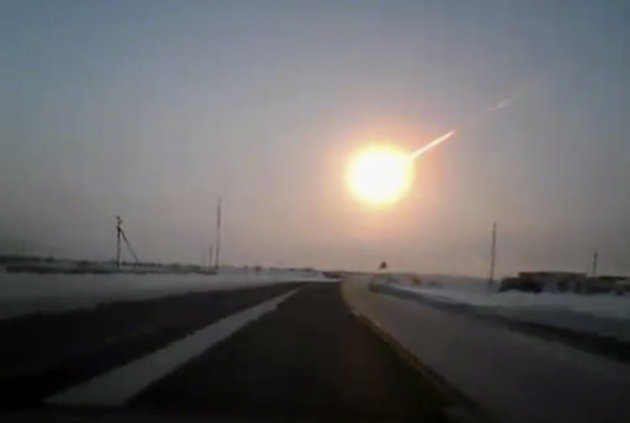 File this under ‘strange coincidence of cosmic phenomena’…

The near-Earth fly-by of asteroid 2012 DA14 co-occurred with a bus-sized meteor entering Earth’s atmosphere over the Russian Ural mountain city of Chelyabinsk, producing blinding flashes and numerous sonic booms — blowing out windows in buildings over a fairly wide area — before finally exploding into a shower of smaller fire balls which rained down on the panicked population.

Initial estimates were that some 500 persons had been injured, but more recent reports put that total to over 1000  persons injured — mostly from the flying debris and glass from damaged buildings. Witnesses described scenes of utter “chaos”.

The Russian Interior Ministry department identified the Chelyabinsk region to be the point of impact* of the meteor which had been spotted earlier (or may have been one of several) in the Urals region, near lake Chebarkul, which is about 80 kilometers (50 miles) west of Chelyabinsk, earlier today (February 15, 2013).

* The meteor did not in fact hit the ground, but rather, exploded in the atmosphere about 10 -15 miles above the surface, with an “air blast” estimated at 300 – 500 kilotons. Had such a meteor been mostly made of iron, instead of rock, it would have conceivably impacted the ground and the damage to life and property would have been much more severe.

Watch these amazing videos taken by residents of Chelyabinsk and environs (article continues below):

in the aftermath of the meteor explosion, and with concerns already high with the 17,000 mile ‘fly-by of asteroid DA14, calls are already being made for some type of anti-asteroid program and/or defense shield or ‘sentry’.

In a timely development, planetsave recently reported on an announcement by ESA (The European Space Agency) and Johns-Hopkins Research Institute to fund plans for an “asteroid intercept” or “deflection” mission called the Asteroid Impact and Deflection Assessment (AIDA).