Skip to content
Loading...
How A Small School In Rural Zambia Will Finally Get Electricity
7 Water And Energy Conservation Strategies For Large Families
How 200 Solar Lights Found Their Way To A Small School In Rural Zambia
Ørsted Consolidates Customer Solutions & Bioenergy Divisions
India’s NTPC Limited Offers Solar Power Project Management Services To ISA Members
5 Tips to Make Your First Bike Commute to the Office a Successful One
Congress Charges Ahead on Energy Storage: (BEST) Act
First Round of 15 Winners of Reinventing Cities Competition Announced, Creating New Beacons of Sustainable Design & Construction
5 Major UK Businesses Powered by Renewable Energy
Buy An Electric Car And Save The Planet! Not So Fast, Consider The Alternatives First
Why Do Republicans Now Hate On Christian Morals, National Security, Democracy, The US Constitution, The Rule Of Law, The FBI, The CIA, Honesty, & The US Deficit?
Don The Con & Crew Creating Alternative Reality That Is Almost Completely Fake
Nasty Gas Smells In Long Beach Launch AQMD Long-Term Investigation — We’re There, And It’s About Time!
BusinessPolicies & Politics

You know what else they do? When they find out that their holy grail economics policy (i.e. lowering taxes on the rich ‘to help the country’) is nonsense, they pull the plug on research that’s about to show that.

Yep, that’s just what Republicans in congress have done.

The New York Times has reported that “The Congressional Research Service has withdrawn an economic report that found no correlation between top tax rates and economic growth, a central tenet of conservative economy theory, after Senate Republicans raised concerns about the paper’s findings and wording.”

Way to go, GOP! Way to let honest research be published! Way to admit when you’re completely, 100% wrong! (Not.)

“Now, Republicans have warned for decades that that increasing tax rates on so-called ‘job creators’ will hurt employment and slow economic growth. As it turns out, the economy grew faster and produced more jobs when upper-income tax rates were higher–even much higher–than today,” Crooks & Liars reports.

Further nailing the “tax cuts for the rich are good for the economy” nonsense, the New York Times‘ David Leonhardt had this to point out two years ago:

Those tax cuts passed in 2001 amid big promises about what they would do for the economy. What followed? The decade with the slowest average annual growth since World War II. Amazingly, that statement is true even if you forget about the Great Recession and simply look at 2001-7…

Is there good evidence the tax cuts persuaded more people to join the work force (because they would be able to keep more of their income)? Not really. The labor-force participation rate fell in the years after 2001 and has never again approached its record in the year 2000.

Is there evidence that the tax cuts led to a lot of entrepreneurship and innovation? Again, no. The rate at which start-up businesses created jobs fell during the past decade. 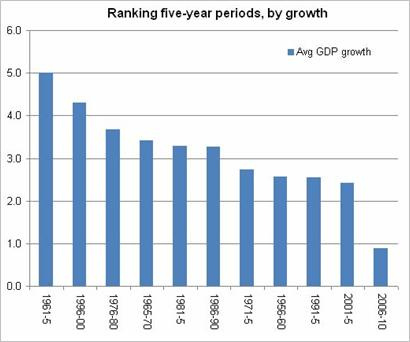 However, lower tax rates for the wealthy do one thing very well — they redistribute wealth to the wealthy. In other words, they make the rich relatively richer while making the rest of us relatively poorer.

Now, any wonder why rich old white men keep trying to ram tax cuts for the rich down our throats?