Skip to content
Loading...
How A Small School In Rural Zambia Will Finally Get Electricity
7 Water And Energy Conservation Strategies For Large Families
How 200 Solar Lights Found Their Way To A Small School In Rural Zambia
Ørsted Consolidates Customer Solutions & Bioenergy Divisions
India’s NTPC Limited Offers Solar Power Project Management Services To ISA Members
5 Tips to Make Your First Bike Commute to the Office a Successful One
Congress Charges Ahead on Energy Storage: (BEST) Act
First Round of 15 Winners of Reinventing Cities Competition Announced, Creating New Beacons of Sustainable Design & Construction
5 Major UK Businesses Powered by Renewable Energy
Buy An Electric Car And Save The Planet! Not So Fast, Consider The Alternatives First
Why Do Republicans Now Hate On Christian Morals, National Security, Democracy, The US Constitution, The Rule Of Law, The FBI, The CIA, Honesty, & The US Deficit?
Don The Con & Crew Creating Alternative Reality That Is Almost Completely Fake
Nasty Gas Smells In Long Beach Launch AQMD Long-Term Investigation — We’re There, And It’s About Time!
Dirty Energy & FuelGreen Your LifePolicies & PoliticsRenewable Energy 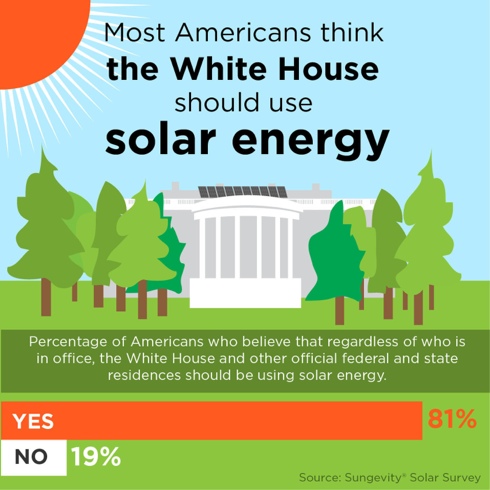 According to a new survey on clean energy, nearly 9 out of 10 (89%) adults in the U.S. think that renewable energy sources, like wind and solar power, should become a larger portion of the U.S. energy supply.

The new poll was conducted by the company Ipsos on behalf of Sungevity, a globally recognized solar energy company.

The survey also found that 80 percent of those surveyed were expecting that elected officials would support solar power initiatives, and 81 percent thought that regardless of which political parties occupied the White House and other official government residences, that they should use solar energy.

“The continued uptake of solar power can drive considerable economic growth for the American economy and provide critical long-term benefits to the environment,” said Danny Kennedy, co-founder of Sungevity and author of new book, Rooftop Revolution, How Solar Power Can Save Our Economy – and Planet – From Dirty Energy. “It’s clear that Americans support and see the bottom-line benefits of solar power. I’d encourage anybody with an interest in saving money, creating jobs and powering their home with clean energy to discover the ease and affordability of incorporating solar energy into their daily lives.”

The survey also found a near consensus on matters of continued fossil fuel use — nearly 81 percent thought that reducing dependency on fossil fuels and nuclear power is the ‘right’ thing to do for the environment and the economy.

Other key survey findings include:

Financial Benefits Are Top Reason for Public Support –Seven in ten (72%) say jobs created in the solar energy industry are better for our economy and our environment than jobs created in the coal, oil, nuclear and gas industries. The majority of Americans(four out of five) believe that the increased use of solar power will reduce household energy costs and will help create local jobs.

American Solar Energy Policies Would Lead to Household Savings –Eight in ten (80%) adults agree that biggest benefits that would encourage support for solar energy are financial in nature, such as reduced energy costs (60%), decreased dependence on the fluctuating cost of fossil fuels (26%), federal/state tax credits (21%) and increased home value (12%).

Consumer Education Is Necessary — Many Americans are lacking information about solar energy, with 70% wishing they knew more about renewable energy sources and nearly half (48%) confused about solar energy options.

Consumer Misperceptions On Solar Services Remain — Adults are apprehensive to use solar energy due to the perceived stress of dealing with installation, such as updating electrical systems and dealing with zoning laws (47%). Other reasons for not using solar energy include the belief it may not be available in their area (16%), it wouldn’t generate enough energy (19%) or they may not live in a sunny location (12%).

“The survey makes it clear that solar companies must do a better job communicating how easy and affordable it is to incorporate solar power into your home,” says Kennedy. “Whether it’s the ability to design a solar system through our Sungevity website or getting a system installed for no money down through our solar lease program, companies like Sungevity are trying to make the customer experience with going solar as easy as possible.”