Skip to content
Loading...
How A Small School In Rural Zambia Will Finally Get Electricity
7 Water And Energy Conservation Strategies For Large Families
How 200 Solar Lights Found Their Way To A Small School In Rural Zambia
Ørsted Consolidates Customer Solutions & Bioenergy Divisions
India’s NTPC Limited Offers Solar Power Project Management Services To ISA Members
5 Tips to Make Your First Bike Commute to the Office a Successful One
Congress Charges Ahead on Energy Storage: (BEST) Act
First Round of 15 Winners of Reinventing Cities Competition Announced, Creating New Beacons of Sustainable Design & Construction
5 Major UK Businesses Powered by Renewable Energy
Buy An Electric Car And Save The Planet! Not So Fast, Consider The Alternatives First
Why Do Republicans Now Hate On Christian Morals, National Security, Democracy, The US Constitution, The Rule Of Law, The FBI, The CIA, Honesty, & The US Deficit?
Don The Con & Crew Creating Alternative Reality That Is Almost Completely Fake
Nasty Gas Smells In Long Beach Launch AQMD Long-Term Investigation — We’re There, And It’s About Time!
Climate ChangeDisasters & Extreme WeatherFloodsGlobal WarmingOther Storms 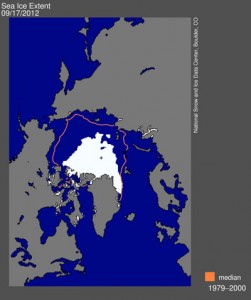 This Summer, the Arctic has seen levels of sea ice melt never before recorded, smashing the previous record for minimum sea ice pack set in 2007. According to climate scientists, we can now consider the Arctic essentially ice-free at the end of the ice-loss season.

Concurrently, Alaska is experiencing a series of extreme weather events that is causing some climate scientists to take note, and perhaps connect the dots.

The vast majority of Arctic sea ice remaining at the end of the 2012 melt season is thin, broken, slushy ice that does not act on the climate in the way that thick sea ice would.

The result, according to climate scientists, is that the ice-free Arctic could cause serious weather consequences, some of which we may already be seeing.

I live in Southcentral Alaska. Two days ago, I joked with a co-worker that we were battling our third ‘storm of the century’ this month.

When I made that comment, our area was being battered by the third day of torrential downpours. We have already experienced three major wind storms in a month, one with an unofficial wind gust of 133 mph in the Anchorage area. Downed trees and power outages have been widespread.

Today, wide areas of Alaska are experiencing flooding. The forecast calls for another series of rain-laden storms to arrive from the Northern Pacific this evening.

In a recent interview with Alaska Public Radio Network reporter Lori Townsend, climate researcher Jennifer Francis of Rutgers University suggests that these long-lasting extreme weather patterns are exactly what climate modeling predicts when we have an Arctic largely free of sea ice.

According to Francis, the naturally undulating jet stream tends to become more extremely deflected when the Arctic warms, creating north-south flows. In this case, warm, moist weather flow patterns extend to the north, bringing a series of high-moisture, high-wind storms into Alaska.

What’s more, the pattern shifts tend to slow, meaning that weather at the surface, be it really pleasant or really extreme, stays with us longer.

Extreme Weather, Even For Alaska

A series of unusual storms has wreaked havoc across Southcentral Alaska this month. Check out this video:

Lowell Creek, at the base of a waterfall, is usually a small stream at the edge of town. A series of extreme weather events has caused significant flooding of local streams.

In the Matanuska Borough, north of Anchorage, several people were evacuated from homes Wednesday afternoon as chest-deep water inundated a subdivision in a matter of minutes. Local rescue personnel were perplexed as the properties were not on any existing waterways or drainages marked on local maps.

On Friday afternoon, levees protecting the small town of Talkeetna, Alaska were breached by floodwaters in three places. According to local emergency personnel, flooding was imminent.

Talkeetna, a small town that serves as a staging area for climbers attempting to summit nearby Mt. McKinley, was made famous in the late 1980s as the real-life model for the fictional town of Sicily in the TV comedy Northern Exposure.

Professor Francis points out that no single weather event can be shown to be a direct result of global climate change (it’s simply a statistical impossibility).

We are looking at larger patterns here, and the current extreme weather patterns are exactly what researchers expect in a world without Arctic sea ice.

About the author: David M. Arthur is a LEED-AP and energy auditor. David is the driving force behind GreenHomesConsultant.com