Skip to content
Loading...
How A Small School In Rural Zambia Will Finally Get Electricity
7 Water And Energy Conservation Strategies For Large Families
How 200 Solar Lights Found Their Way To A Small School In Rural Zambia
Ørsted Consolidates Customer Solutions & Bioenergy Divisions
India’s NTPC Limited Offers Solar Power Project Management Services To ISA Members
5 Tips to Make Your First Bike Commute to the Office a Successful One
Congress Charges Ahead on Energy Storage: (BEST) Act
First Round of 15 Winners of Reinventing Cities Competition Announced, Creating New Beacons of Sustainable Design & Construction
5 Major UK Businesses Powered by Renewable Energy
Buy An Electric Car And Save The Planet! Not So Fast, Consider The Alternatives First
Why Do Republicans Now Hate On Christian Morals, National Security, Democracy, The US Constitution, The Rule Of Law, The FBI, The CIA, Honesty, & The US Deficit?
Don The Con & Crew Creating Alternative Reality That Is Almost Completely Fake
Nasty Gas Smells In Long Beach Launch AQMD Long-Term Investigation — We’re There, And It’s About Time!
Climate ChangeGlobal WarmingNatureOceansScience 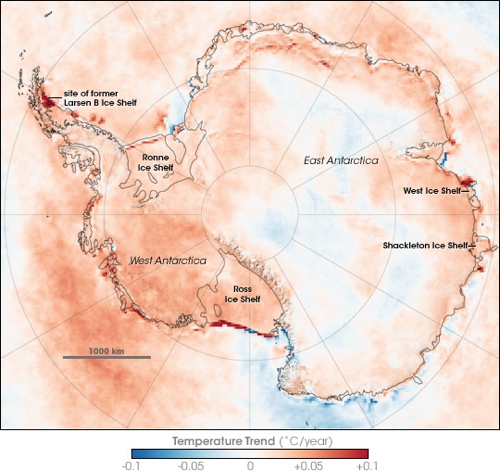 Massive and rapid changes in the Antarctic ice sheet are possible because of the action of fast-flowing and narrow glaciers, leading to rapid ice-sheet decay and sea-level rise, according to a just released study.

It’s now been revealed in more detail than ever before “how warming waters in the Southern Ocean are connected intimately with the movement of massive ice-sheets deep in the Antarctic interior.”

“It has long been known that narrow glaciers on the edge of the Antarctica act as discrete arteries termed ice streams, draining the interior of the ice sheet,” says Dr Chris Fogwill, an author of the study and an ARC Future Fellow with the UNSW Climate Change Research Centre.

“However, our results have confirmed recent observations suggesting that ocean warming can trigger increased flow of ice through these narrow corridors. This can cause inland sectors of the ice-sheet — some larger than the state of Victoria — to become thinner and flow faster.”

Here are more details from the University of New South Wales news release about the research:

The researchers, led by Dr Nicholas Golledge from Victoria University of Wellington, New Zealand, tested high-resolution model simulations against reconstructions of the Antarctic ice sheet from 20,000 years ago, during the last glacial maximum.

They used a new model, capable of resolving responses to ice-streams and other fine- scale dynamic features that interact over the entire ice sheet. This had not previously been possible with existing models. They then used this data to analyse the effects of a warming ocean over time.

The results showed that while glacier acceleration triggered by ocean warming is relatively localized, the extent of the resultant ice-sheet thinning is far more widespread. This observation is particularly important in light of recently observed dynamic changes at the margins of Antarctica. It also highlighted areas that are more susceptible than others to changes in ocean temperatures.

The glaciers that responded most rapidly to warming oceans were found in the Weddell Sea, the Admundsen Sea, the central Ross Sea and in the Amery Trough.

The finding is important because of the enormous scale and potential impact the Antarctic ice sheets could have on sea-level rise if they shift rapidly, says Fogwill. “To get a sense of the scale, the Antarctic ice sheet is 3km deep – three times the height of the Blue Mountains in many areas – and it extends across an area that is equivalent to the distance between Perth and Sydney.

“Despite its potential impact, Antarctica’s effect on future sea level was not fully included in the last IPCC report because there was insufficient information about the behaviour of the ice sheet. This research changes that. This new, high-resolution modelling approach will be critical to improving future predictions of Antarctica’s contribution to sea level over the coming century and beyond.”

The research was just published in the journal Proceedings of the National Academy of Sciences.