Skip to content
Loading...
How A Small School In Rural Zambia Will Finally Get Electricity
7 Water And Energy Conservation Strategies For Large Families
How 200 Solar Lights Found Their Way To A Small School In Rural Zambia
Ørsted Consolidates Customer Solutions & Bioenergy Divisions
India’s NTPC Limited Offers Solar Power Project Management Services To ISA Members
5 Tips to Make Your First Bike Commute to the Office a Successful One
Congress Charges Ahead on Energy Storage: (BEST) Act
First Round of 15 Winners of Reinventing Cities Competition Announced, Creating New Beacons of Sustainable Design & Construction
5 Major UK Businesses Powered by Renewable Energy
Buy An Electric Car And Save The Planet! Not So Fast, Consider The Alternatives First
Why Do Republicans Now Hate On Christian Morals, National Security, Democracy, The US Constitution, The Rule Of Law, The FBI, The CIA, Honesty, & The US Deficit?
Don The Con & Crew Creating Alternative Reality That Is Almost Completely Fake
Nasty Gas Smells In Long Beach Launch AQMD Long-Term Investigation — We’re There, And It’s About Time!
BusinessDirty Energy & FuelEnergy ConservationPolicies & PoliticsRenewable Energy 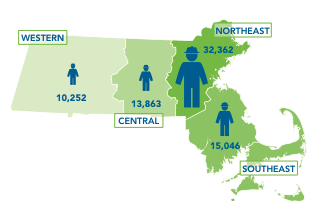 If you’re looking for an example of how to grow a strong economy and create high-paying jobs during the economic downturn, it may be a smart idea to take a look at Massachusetts. The Bay State is now home to more than 71,500 green jobs – up 11 percent since 2011. These numbers are exponentially larger than just one year ago. Since 2011, clean energy employment grew 11.2 percent, nearly ten times faster than the state’s overall 1.2 percent employment growth rate. Even better, Massachusetts’ clean energy industry expects to grow 12.4 percent and add 8,881 new green jobs in 2012. By comparison, overall state employment is only projected to grow 1.4 percent over the same time period.

For the purposes of the report, the MCEC defined a clean energy firm as an employer engaged in whole or in part in providing goods and services related to renewable energy, energy efficiency, alternative transportation, and carbon management. A clean energy worker is defined as any worker spending at least a portion of their time supporting the clean energy aspects of their business.

While the overall growth of green jobs in Massachusetts is exceptional, it’s also worth noting that they are diverse and varied across numerous industries. Of the 71,523 total green jobs, 18,280 work in installation and maintenance; 20,671 work in sales and distribution; 13,182 work in engineering and research; 11,162 work in manufacturing; and 8,229 work in legal, finance, or policy support.

These different industries seem to be strengthening each other, and creating new growth along the entire value chain. Manufacturing and assembly grew 37 percent between 2011-2012, fed by growth in engineering and research (20 percent growth) and sales and distribution (11 percent growth). As the primary industries have grown, activity has grown in supporting industries like finance, legal, policy and other support (44 percent growth).

The only green economic sector to have shrunk in the past year was installation and maintenance, which dropped 11.7 percent but remained the overall largest employer. The MCEC attributes this dip to continued weakness in the construction industry, as well as increased efficiency and consolidation of regional firms.

Clean energy firms work in many technologies, but energy efficiency and renewable energy clearly lead the way. Energy efficiency goods and services represent 2,646 firms and 40,207 workers (up 9.9 percent from 2011), while renewable energy technologies are a close second with 2,205 firms and 29,777 workers (up 25.6 percent from 2011).

Massachusetts’ clean energy industry is also geographically diverse, spread across all four major regions of the state, but led by the Northeast with 32,362 green jobs – more than twice as much as the second-highest region.

The overall findings of the Massachusetts Clean Energy Industry Study shouldn’t be surprising, if you really think about it. The state has dedicated itself to supporting the clean energy industry through legislation like the Green Communities Act, the Green Jobs Act, and the Global Warming Solutions Act.

As a result, Massachusetts has the highest per-capita investment rate in the U.S., has received 17 percent of the U.S. Department of Energy’s ARPA-E program funding for transformative energy research projects, and has a thriving clean energy industry that is becoming a self-sustaining economic engine. As the economy struggles to recover across the country, policymakers should consider the success that a clear regulatory system, and policies that support innovation, can have on green job growth.