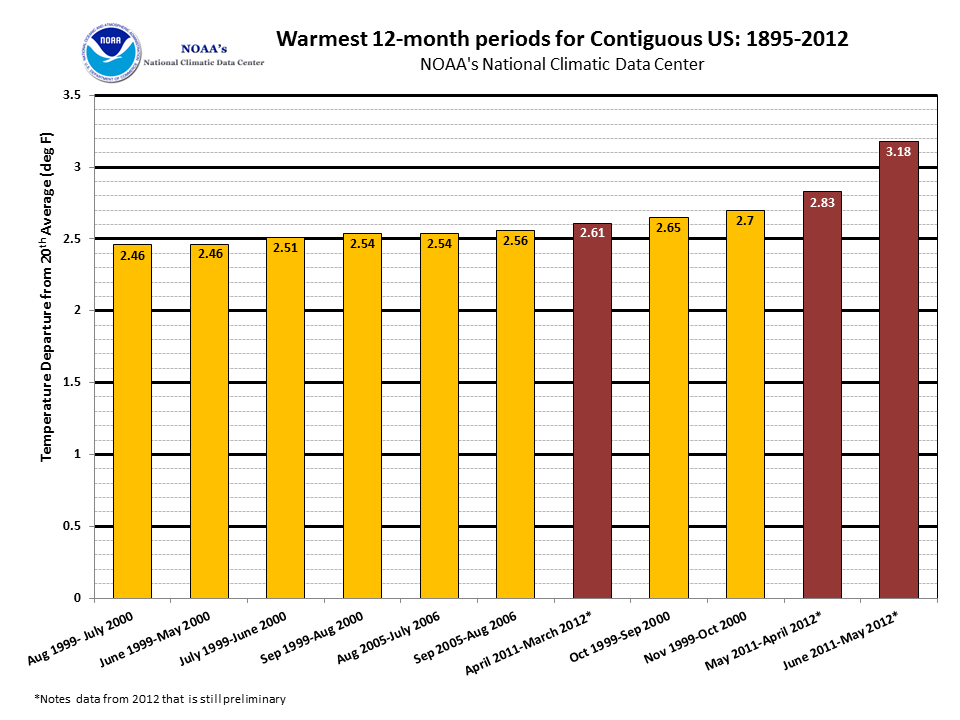 NOAA recently released its latest data on US temperatures. The highlights (i.e. lowlights)? The lower 48 states “experienced record warm year-to-date and twelve-month periods,” 2012 was the hottest Spring on record, and May was the second hottest on record. Additionally, we just wrapped up the hottest 12-month period on record.

And the Spring’s record high temperatures weren’t just a little over — they were two degrees over! “The spring season’s (March-May) nationally-averaged temperature was 57.1°F, 5.2°F above the 1901-2000 long-term average, surpassing the previous warmest spring (1910) by 2.0°F.” This “marked the largest temperature departure from average of any season on record for the contiguous United States.”

For more US climate highlights, including drought, precipitation, and storm facts, check out the full NOAA post. Overall, though, the message was clear: May and Spring of 2012 were extreme. ‘The U.S. Climate Extremes Index, an index that tracks the highest and lowest 10 percent of extremes in temperature, precipitation, drought and tropical cyclones across the contiguous U.S., was a record-large 44 percent during the March-May period, over twice the average value. Extremes in warm daytime temperatures (81 percent) and warm nighttime temperatures (72 percent) covered large areas of the nation, contributing to the record high value.” (emphasis added)

The sad thing is, due to our illogical inaction on global warming and climate change, we can only expect that many of the records above will soon be broken.