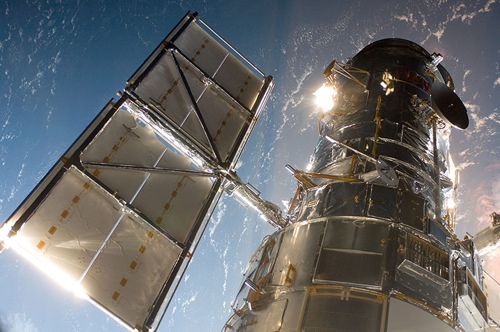 The National Reconnaissance Office (NRO), an American Spy Agency, is giving two of its powerful space telescopes to NASA. Apparently because they are “surplus” telescopes.
According to NASA, if they are repurposed to fit the agency’s needs, then they will be more powerful than the Hubble Space Telescope, which is nearing the end of its life and in need of a replacement.

The two satellites from the NRO could serve as replacements. If repurposed, they could perform much of the same research that Hubble does, and for a much cheaper price than building a new space telescope from scratch.

It’s unclear why the NRO no longer needs them and considers them “surplus.” And what exactly their original purpose was. NRO spokeswoman Loretta Desio is quoted by The New York Times as saying that it “is not something we’re going to talk about … We’re hoping this becomes a NASA story.”

David Spergel, a Princeton astrophysicist and co-chair of the National Academies advisory panel on astronomy and astrophysics, said in an interview with The Washington Post that the “scopes outclass Hubble’s resolving power — by 100 times. Although they have Hubble-sized mirrors, they also have a maneuverable secondary mirror, allowing for better focusing.”

The satellites will have to undergo many modifications before use, and be outfitted with astronomical tools such as spectrometers, cameras, and processing units.

While the pre-built satellites will save NASA some money, the repurposing of the satellites will still require a good deal of money and take a couple of years. The space telescopes likely won’t be launched before the early 2020’s.