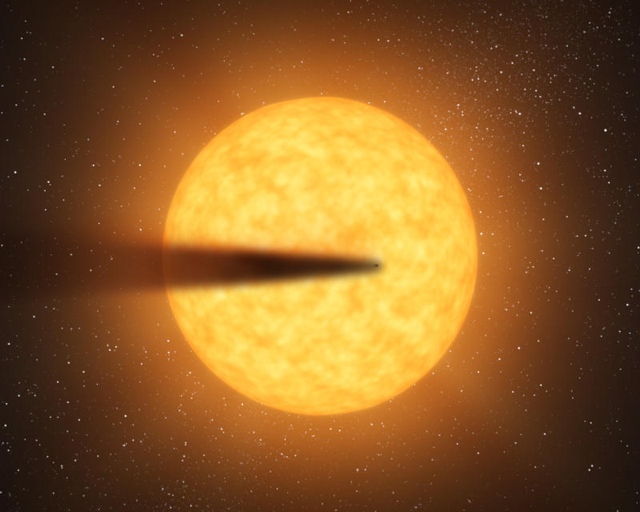 A newly discovered exoplanet appears to be evaporating from the heat of its parent star, according to new research by MIT and NASA.

The planet appears to be followed by a long trail of debris. The planet is about the size of mercury, and the researchers estimate that it will completely disintegrate within 100-million years.

The researchers found that the planet circles its star once every 15 hours, and judging by the makeup and type of its star, the planet should be around 3,600 degrees Fahrenheit. They speculate that, at those temperatures, the rocky surface evaporates and trails the planet as thick dust during its orbit.

“We think this dust is made up of submicron-sized particles,” says co-author Saul Rappaport, a professor emeritus of physics at MIT. “It would be like looking through a Los Angeles smog.”

The research was done using the Kepler Observatory, a space telescope used to look for new planets outside of our solar system.

Using Kepler, the researchers found a strange light pattern coming from a star labeled KIC 12557548. Investigating it, they found that the light dimmed by differing intensities every 15 hours. Therefore, suggesting that something was blocking it regularly, during an orbit but by varying degrees.

After trying out many theories, the only one that stuck was that the star was being orbited by a somewhat amorphous object.

“I’m not sure how we came to this epiphany,” Rappaport says. “But it had to be something that was fundamentally changing. It was not a solid body, but rather, dust coming off the planet.”

Researching different ways that enough dust could be blown off the planet to cause the effect they were seeing, they concluded that the planet must be about the size of mercury, with a low gravitational field, and also extremely hot.

They were left with two explanations for how the dust forms — either as ash from volcanoes, or from metals vaporizing at high temperatures.

Using computer models, they found that the dust was thickest immediately following the planet, and thinning out considerably further out.

Simulating this model, the researchers found that the light patterns matched the ones the Kepler probe had found.

“We’re actually now very happy about the asymmetry in the eclipse profile,” Rappaport says. “At first we didn’t understand this picture. But once we developed this theory, we realized this dust tail has to be here. If it’s not, this picture is wrong.”

Dan Fabrycky, a Kepler Observatory researcher, is quoted as saying, “This might be another way in which planets are eventually doomed. A lot of research has come to the conclusion that planets are not eternal objects, they can die extraordinary deaths, and this might be a case where the planet might evaporate entirely in the future.”

The research has just been published in Astrophysical Journal.