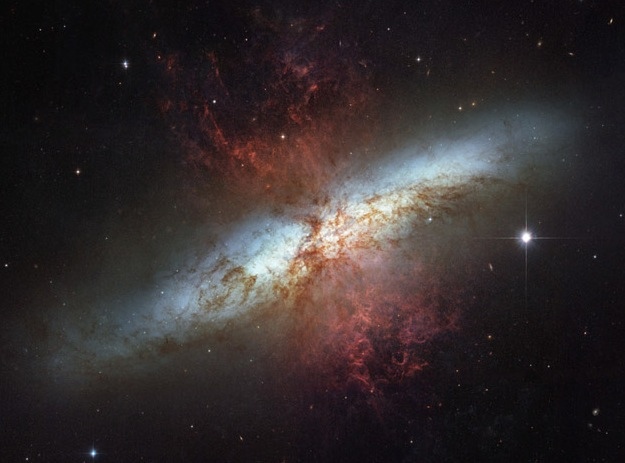 The earliest galaxies in the universe, those that formed more than 12 billion years ago, had much higher levels of the heavy elements needed for life, as we know it, than originally thought, according to new research.

It’s assumed that the earliest stars were composed entirely of hydrogen and helium, and that all heavy elements are the result of nuclear processes inside of stars.

Stars are giant balls of gas that fuse helium and hydrogen atoms into heavier elements, releasing energy in the process. When no more energy can be extracted, the star dies, and releases massive amounts of dust and gas into space. The large clouds then condense and reform stars, but with more ‘heavy’ elements present, such as oxygen and carbon. Life as it’s currently known, is composed of and reliant on these elements.

Previously, it had been assumed that it took billions of years for stars to form these ‘heavy’ elements in large quantities.

But new research shows that in some galaxies they were created very quickly.

“We have studied 10 galaxies in the early Universe and analysed their light spectra. We are observing light from the galaxies that has been on a 10-12 billion year journey to Earth, so we see the galaxies as they were then. Our expectation was that they would be relatively primitive and poor in heavier elements, but we discovered somewhat to our surprise that the gas in some of the galaxies and thus the stars in them had a very high content of heavier elements. The gas was just as enriched as our own Sun,” explains Professor Johan Fynbo from the Dark Cosmology Centre at the Niels Bohr Institute, University of Copenhagen.

Galaxies that old are not normally observable directly because of how far away they are. So the research team used a method specialized for this purpose.

“There are some extreme objects in the Universe called quasars. Quasars are gigantic black holes that are active and when matter falls into them, they emit light that is as strong as thousands of galaxies. They are like a kind of lighthouse that lights up in the Universe and can be seen very far away,” says Jens-Kristian Krogager, PhD student at the Dark Cosmology Centre at the Niels Bohr Institute, University Copenhagen, explaining that in order to use quasars as light sources the quasar must lie behind the galaxy you want to observe.

Researchers have studied 10 galaxies in the early Universe by using quasars as light sources. In order to use quasars as light sources the quasar has to lie behind the galaxy you want to observe. By looking at the light from the distant quasar (A) that shines through the galaxy (B) on its way to Earth, researchers can determine which elements the galaxy contains from the light that is absorbed. This is seen as lines in the spectrum of the quasar.

“We then look at the light from the quasar and can see that some light is missing. The missing quasar light in the image has been absorbed by the chemical elements in the galaxy in front of it. By analysing the spectral lines we can see which elements there are and by measuring the strength of each line we can see the amount of the elements,” explains Jens-Kristian Krogager.

The research found that the galaxies from the early universe had surprisingly large quantities of the ‘heavy’ elements. One galaxy, in particular, got the attention of the researchers.

“For one of the galaxies, we observed the outer regions and here there was also a high element content. This suggests that large parts of the galaxy are enriched with a high content of heavier elements and that means that already in the early history of the Universe there was potential for planet formation and life,” says Johan Fynbo.