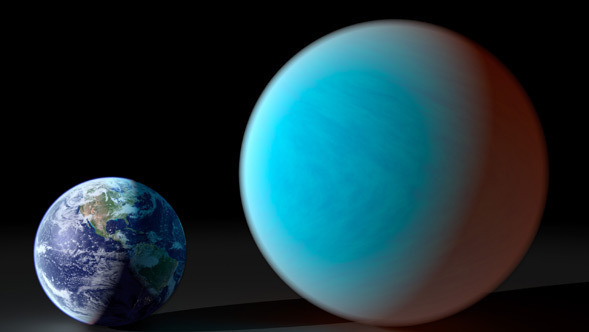 [Updated with  correction] In the ever-growing catalog of extra-solar planets (including many gas giants termed “hot” Jupiters or Neptunes), “super-Earths” — exoplanets that are somewhat to very Earth-like, only larger — are of special interest. Their discovery offers a potential glimpse of an alien world perhaps not too unlike our own (if only in size).

But while planetary scientists can make fairly good guesses as to these planets’ general features, their unique atmospheres, and even the possibility of them possessing water (in liquid or ice form), more detailed analyses of these planets are difficult to make. This is primarily due to the lack of light either bouncing off them or coming from them.

But in what astronomers are calling an “historic achievement”, NASA’s Spitzer Space Telescope has detected light from a super-Earth for the first time. The super-Earth is called 55 Cancri e and it orbits its parent star some 41 light years from us.  The exoplanet is no stranger to exoplanet hunters; it was first discovered in 2004. But this is the first time that scientists have been able to detect infra-red light coming from the alien world.

Although it is only about twice the radius of our planet (which is one of the smaller super-Earths yet found), 55 Cancri e is a super dense “rocky Earth” with a mass about eight times that of Earth’s.

Scientists have determined that the exoplanet is not habitable as it is 26 times closer to its sun than is Mercury to our Sun, giving it a day time temperature of over 3000 °F (over 1700 °C). Consequently, its atmosphere is very thin. It also zips around its parent star (55 Cancri) in just 18 hours! (one year = 18 hours).

The Spitzer Space Telescope had previously detected infra-red light from an alien world, but that was a “hot Jupiter” — one of those gaseous giants mentioned earlier — which also orbited very close to its parent star.  This is the first time that light (of any wavelength) from a rocky super-Earth has been detected.

55 Cancri e is part of an alien solar system that contains five planets, all orbiting the star 55 Cancri, which appears to us in the constellation Cancer (The Crab). Since its discovery, astronomers have been intrigued by this rather odd super-Earth. For one thing, it’s oozing, that is, its atmosphere is leaking into space.

Earlier spectral analysis showed that about 1/5 of the planet is composed of lighter elements (including water) that exist in a supercritical fluid state. Such fluid states occur when a gas, under tremendous pressure and temperature, behaves in some ways like a liquid. Astronomers believe that the planet is most likely a rocky world with a watery surface in a supercritical fluid state and blanketed by a steamy, thin atmosphere.

The conditions on the planet would be similar to our Neptune’s atmosphere, but much hotter and with most of its atmosphere boiled off. According to present planet formation models, 55 Cancri e could not have been formed so close to its parent star. Astronomers surmise that it formed much further out in space and, due to gravitational forces from the other planets in the system, was gradually pulled in much closer — losing much of its atmosphere in the process. Planetary scientists believe that the exoplanet is in a “death spiral” with its star.

The Spitzer telescope spotted the  planet’s light as it transited its star. Only a small number of super-Earths transit the face of their parent stars (as viewed from Earth). So far, 55 Cancri e is the smallest transiting super-Earth  in our part of the Galaxy. Its light is actually bright enough to be seen with the unaided eye on a clear night.

The Spitzer Space Telescope, though aging (its now in its “warm” phase due to losing much of its liquid helium coolant), is still making important discoveries thanks largely to its marvelous engineering and its ability to adapt its functions to new challenges.

In a statement today (May 8), Spitzer program scientist Bill Danch of NASA headquarters in Washington said: “The spacecraft is pioneering the study of atmospheres of distant planets and paving the way for NASA’s upcoming James Webb Space Telescope to apply a similar technique on potentially habitable planets.”

The research and discovery was published in the Astrophysical Journal. The lead author is Brice-Olivier Demory of the Massachusetts Institute of Technology in Cambridge.