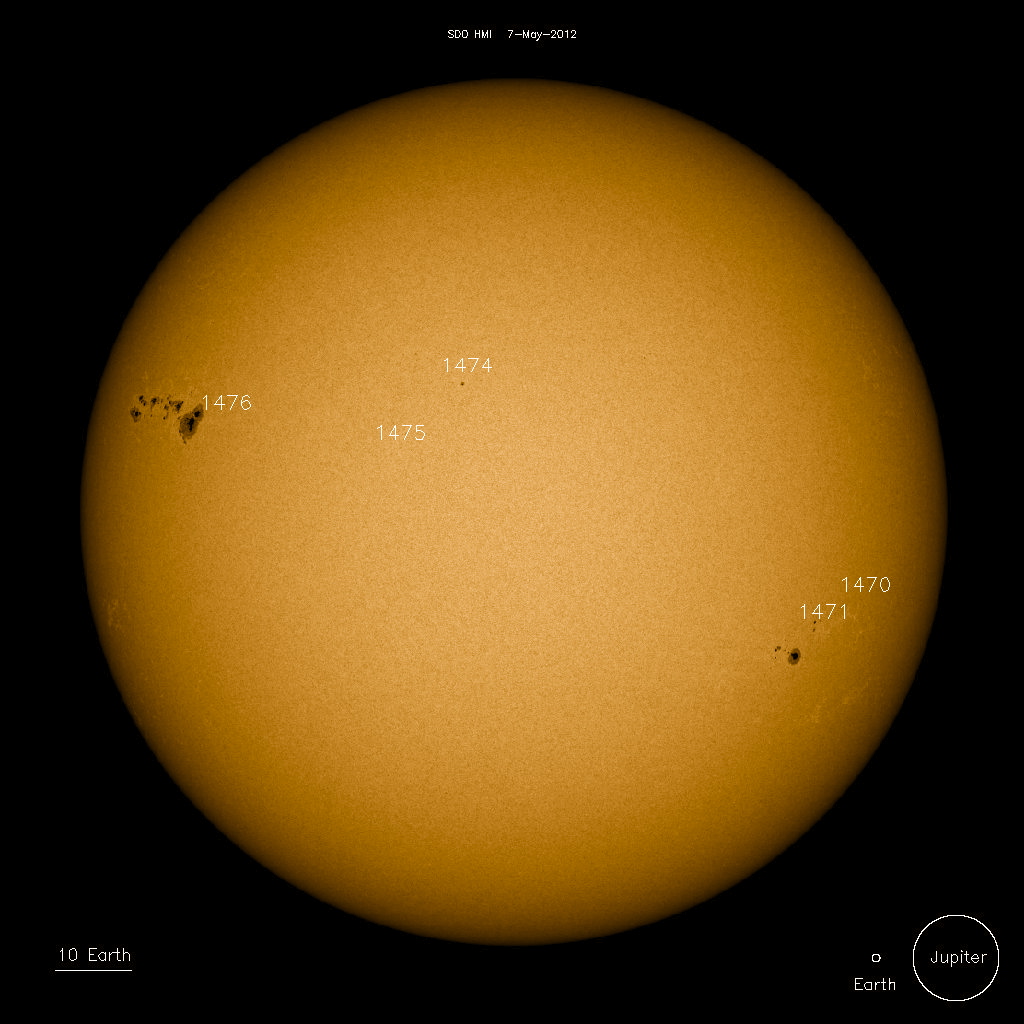 Images of the region were picked up by NASA’s Solar Dynamics Observatory (SDO), a space-based telescope that continuously monitors the sun’s activity

AR 1476 has at least “four dark cores” that are larger than in diameter than the Earth. The sunspot is large enough that even amateur astronomers can glimpse it (though one should never view the sun directly through a telescopic lens).

Sunspots are transient, magnetically active dark patches that appear frequently on the sun’s surface — often in oppositely charged pairs — and which often precede solar flares and even coronal mass ejections (CMEs), which are massive bursts of plasma energy that are shot out into space at around 3 million miles per hour (about 5 million kph).

The appearance of AR 1476 coincides with Solar Cycle 24’s solar maximum, which seems to be revving up with several large X-class solar flares (the most powerful category of flare) in the past year. The size of the active region gives scientists reason to expect large solar flares in the coming days — mostly M-class flares but possibly X-class flares — and possibly also a CME… all of which may mean one or more powerful solar storms blasted out into space towards Earth.

Additionally, another active region — AR 1471 — erupted late Monday, triggering several C-class flares (the least powerful type of flare) over the past two days. One flare from this region was categorized as a “weak” M-class flare (a moderate intensity M1-class flare).

Such solar storms can trigger geomagnetic storms around the Earth and disrupt communication satellites and pose dangers for astronauts such as those on the International Space Station (ISS). They can even cause electric grids here on earth to overload.

On the cool side, such CME-triggered geomagnetic storms intensify our Earth’s auroras — sparking gorgeous fluid-like displays of charged particles in the upper atmosphere (the ‘Northern Lights’).

Solar scientists expect our star’s solar maximum to continue through 2013. To stay up to date on AR 1476 and other solar events, check back here at Planetsave (look here for amazing videos of Solar Flares and CMEs), or pop on over to Spaceweather.com.

As of this update, no X-class flares have been reported nor any coronal mass ejections (CMEs). check back to Planetsave.com for more space weather news as AR1476’s activity continues.