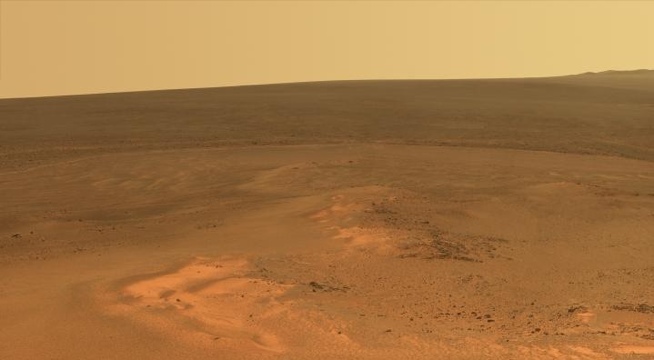 New research supports the theory that early Mars had a thick, wet atmosphere, and a climate similar to the Earth’s climate now.

The atmosphere of Mars is currently less than 1% the density of Earth’s atmosphere. That’s one of the main reasons that the Earth’s climate is wet and Mars is very dry.

As research suggesting that early Mars had a more Earth-like climate has been accumulating, more scientists have been researching the atmosphere of early Mars.

The new findings, just published in the journal Geophysical Research Letters, provide evidence that early Mars was saturated with water, and that its atmosphere was at least 20 times thicker than it is now.

“Atmospheric pressure has likely played a role in developing almost all Mars’ surface features,” said Dufek, an instructor in the School Earth and Atmospheric Sciences. “The planet’s climate, the physical state of water on its surface and the potential for life are all influenced by atmospheric conditions.”

The first research tool used was a rock propelled into the atmosphere during a volcanic eruption 3.5 billion years ago.
The rock landed in the volcanic sediment, and has presumably been there since.

The other tool used, the Mars rover Spirit, investigated the buried rock fragment. The research team received enough data to determine the size, depth and shape of the impact that the rock made, after falling back down through the atmosphere.

The research team then simulated impacts in the lab. They used sand grains that were the same size as the ones at the impact crater. Different materials were used to simulate the rock — glass, rock, and steel. And a range of different firing speeds were also used to fire the material into dry, damp and saturated sand beds. Regardless of the type of material used, the saturated sand beds consistently produced impact craters similar to the one in the volcanic sediment.

The researchers also found that the materials must hit the sand at speeds of less than 40 meters per second to get the same penetration depth the impact crater has.

The atmosphere on Mars would need to be at least 20 times thicker than it is now to hit that speed, further supporting the theory of a much thicker early atmosphere.

“Our study is consistent with growing research that early Mars was at least a transiently watery world with a much denser atmosphere than we see today,” said Dufek. “We were only able to study one bomb sag at one location on the Red Planet. We hope to do future tests on other samples based on observations by the next rover, Curiosity.”

The Curiosity rover is set to land on Mars on August 5th.