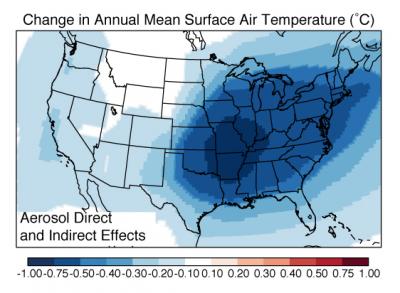 Using atmospheric and temperature data collected between 1930 and 1990, climate scientists at the Harvard School of Engineering and Applied Sciences (SEAS) have discovered what they are calling a ‘warming hole’ — a large area of cooler temperature trends — that had kept the eastern U.S. up to 1° C (1.8 °F) cooler than predicted from the effects of GHGs like carbon dioxide and methane.

While increases in CO2 and CH4 (methane gas) have proven warming effects on the near-surface atmosphere, other factors such as some forms of particulate pollution (also called aerosol pollution) can have a significant cooling effect via the reflecting of sunlight back into space.

This cooling effect of some aerosol pollution has been understood for some time, but this newest research demonstrates for the first time the impact this type of pollution can have on a regional climate system.

“What we’ve shown is that particulate pollution over the eastern United States has delayed the warming that we would expect to see from increasing greenhouse gases,” says lead author Eric Leibensperge.

The study found that interactions between the particles and clouds amplified the cooling effect. Additionally, they found that these same particles can act as nucleation sites for cloud droplets, which reflect even more sunlight and can produce even greater cooling effects.

While not all particulate pollution has this cooling effect — black soot aerosol pollution tends to trap heat in the atmosphere — some smaller aerosols produced as a by-product of industrial processes can offset slow local warming trends this way.

However, reductions in particulate pollution over this region — mostly sulfate pollutants from coal-burning plants — peaked in the 1980’s, and, since 1990, warming has caught up to predicted levels.

“For the sake of protecting human health and reducing acid rain, we’ve now cut the emissions that lead to particulate pollution but these cuts have caused the greenhouse warming in this region to ramp up to match the global trend,” adds Leibensperge.

It is an ironic state of affairs: thanks to the Clean Air Act of 1970 (which was strengthened in 1990), we have achieved healthier, cleaner air, but as a result, we are now seeing more warming impacts in this region.

Note: Compared to greenhouse gases, most aerosol/particulate pollution has a very short lifetime (about seven days), which results in uneven distribution over the Earth’s atmosphere due to transient and random, short-term weather conditions.

The researchers do not foresee any more warming impacts due to further reductions in these aerosols.

“Such a large fraction of the sulfate has already been removed that we don’t have much more warming coming along due to further controls on sulfur emissions in the future,” states principal investigator Daniel Jacob, the Vasco McCoy Family Professor of Atmospheric Chemistry and Environmental Engineering at SEAS

This research was published this week in the journal Atmospheric Chemistry and Physics and will no doubt have significant impact on nascent climate policies in the developing world (especially China). Many developing world nations do not have air quality regulations as extensive as here in the U.S.

The research was based upon data from two models: the pollution data comes from the GEOS-Chem model (developed at Harvard), which has become an international standard for modeling pollution over time; the climate data comes from the general circulation model developed by NASA’s Goddard Institute for Space Studies.

The research was supported by the Electric Power Research Institute (EPRI) and the Environmental Protection Agency (EPA); neither EPRI nor the EPA has officially endorsed the results. The work also benefited from resources provided by Academic Computing Services at SEAS.